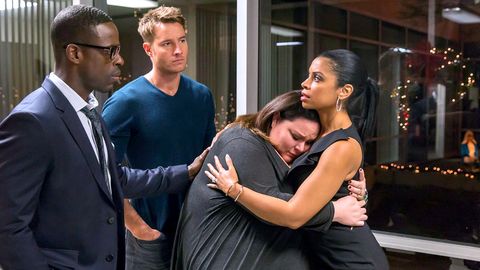 This post contains spoilers for This Is Us season two.

We've known since January 2017 that This Is Us would be around to bring us to tears for at least three seasons—the NBC drama was renewed for a second and third season simultaneously, following its massive early success. But where will the show go in season three, especially now that the cause of Jack's death has finally been revealed? Here's everything we know about the hit show's upcoming third season.

This Is Us will return in the fall. Although no official release date has been set, it's fairly safe to assume it will premiere in late September (season one premiered September 20, 2016 and season two premiered on September 26, 2017).

Like seasons one and two, season three is set to run for 18 episodes.

Don't worry: Milo Ventimiglia will be back. One of the biggest fears fans harbored throughout seasons one and two was that Pearson patriarch Jack might disappear from the show's flashback timeline after his cause of death was finally revealed. This will not be the case.

"Even though we saw Jack pass, that doesn't mean I, Milo, am leaving the show," Ventimiglia revealed on Megyn Kelly Today earlier this month. "There's no Ned Stark happening."

The rest of the series' main and recurring cast members are expected to return (including all the Pearsons, past and present). In addition to flashbacks, however, season three will likely feature a lot more flash-forwards—like the one we saw of Randall and Tess that reveals Tess grows up to be a social worker. Adult Tess is played by Iantha Richardson.

Co-showrunner Elizabeth Berger told EW of the flash-forward timeline, "I think we’re going to a really interesting and surprising place…. Anything is possible."

Now that the show's big early mystery (how Jack Pearson died—spoiler, it was at the hands of a faulty crockpot, after complications from inhaling smoke during a house fire) has been solved, what's next? A lot, apparently.

According to Mandy Moore, the relationship between Rebecca and Miguel will be a big focus of the show's third season.

"It's hard to imagine Jack without Rebecca, and Rebecca without Jack, and that she did move on with her life. I feel like that is going to be the biggest battle of the show...getting people to become Team Miguel," the actress told Extra.

Another relationship that will get more screen time in season three is the one between brothers Randall and Kevin. “There is something about the two brothers together, you see a lot of it in the finale, there is something so real about them as brothers," creator and co-showrunner Dan Fogelman said at the SXSW panel, according to People. "So I go, 'Shit, we need to get Randall and Kevin on camera [together] more.'"

While Randall and Kevin might strengthen their bond in season three, Randall and Beth will continue to struggle.

"There will be a bit of an exploration of marriage with regards to Randall and Beth going through times that aren’t all sunshine and rainbows,” Sterling K. Brown, who plays Randall, told People. "That’s not to say that they are in danger of parting ways, but marriage is real and takes work."

Non-Pearsons like Deja and Toby will also get more attention in season three, with producers promising to delve into the characters' backstories in the upcoming season. 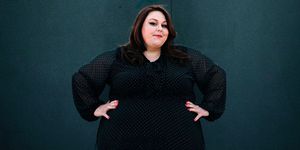 'This Is Us' Star Chrissy Metz Takes On the F Word
This content is created and maintained by a third party, and imported onto this page to help users provide their email addresses. You may be able to find more information about this and similar content at piano.io
Advertisement - Continue Reading Below
More From Culture
'Shadow and Bone' Season 2: Everything We Know
Will There Be a Season 3 of 'Virgin River'?
Advertisement - Continue Reading Below
The 'Younger' Cast Plays Trivia About Each Other
The K-Movies on Netflix You'll Be Hooked On
The 12 Best Action Movies of 2021 (So Far)
Ready for a Good Cry? Try a Korean Romance Movie
The Most Eagerly Anticipated Horror Movies of 2021
Jessie Ennis & Charlotte Nicdao on 'Mythic Quest'
The True Crime Podcasts We've Been Hooked On
Zendaya Shared Pics From the Set of 'Euphoria'