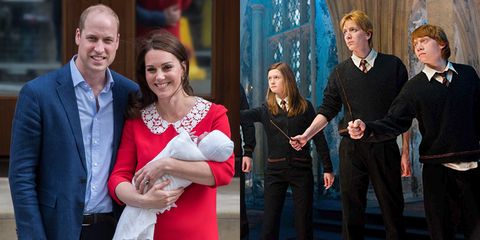 This morning, Kate Middleton and Prince William FINALLY announced the name of their new baby: Louis Arthur Charles. Hooray! There's a lot of meaning behind Prince Louis' name: He shares Louis with his dad and brother and it's also the name of Prince Philip's favorite uncle. Arthur is another name he has in common with William as well as his grandfather, Prince Charles. And then Charles is also, of course, the name of his grandfather.

But the new royal baby also shares his names with another iconic British family: The Weasleys.

Sure, it may not have been intentional (because if they were going for an HP reference that also worked with the royal family, they should have chosen Harry ... or even Henry!), but still, even imaging Kate and Wills as Harry Potter fans...

Related Story
Best Twitter Reactions About the New Royal Baby
Sally Holmes Digital Director Sally is the Digital Director of MarieClaire.com where she oversees coverage of all the things the Marie Claire reader wants to know about, including politics, beauty, fashion, celebs, and Prince Harry's facial hair.
Advertisement - Continue Reading Below
More From The Ultimate Guide to the Royal Family
Prince William Just Got a New Royal Title
Harry Felt Constrained by Royal Duties Growing Up
Advertisement - Continue Reading Below
Er, Meghan and Kate Haven't Spoken Since Megxit
Why Harry and Meghan Should Keep Their Protections
Why the Queen Canceled One of Her Annual Events
Meghan & Harry's Trademark's Been Blocked for Now
People Think Prince Charles Ignored Mike Pence
Meghan Markle's $65 Sunglasses Have Been Restocked
Meghan Markle Would Love to Be the Breadwinner
I Need Kate Middleton's Leopard Print Skirt