If you're already struggling to get through your Monday morning, here's a pop of joy for you: As of first thing this morning, UnREAL season four is streaming on Hulu. "What?!" I hear you say. "Didn't the third season literally just come out on Hulu?" You'd be right: After initially airing on Lifetime, Hulu dropped the critically acclaimed show's third season two weeks ago—and followed up this morning by releasing the fourth. Boom.

Brace yourself, however: I have good news and bad news. The good news is that all eight episodes of the show's fourth season are airing right now on Hulu, meaning that it's time to call into work with a ragged-sounding voice and insist you "won't be able to make it today." If, like me, you're still deeply entrenched in the third season on Hulu, you can binge the rest of it and move straight onto the next season. Bingo.

Now for the bad news: This fourth season will be the very last season of UnREAL, representatives for the show confirmed to Vulture today. (I know. I know. An emotional rollercoaster.) In an email to Vulture, Jeffrey Bowyer-Chapman (who plays Jay), wrote: "Everyone involved is so pleased with the way we’ve wrapped up these characters’ stories, and I’m sure the audience will be just as satisfied."

In an interview with Entertainment Weekly, Zimmer said: "We were so worried that everyone was going to have to wait another year to see season 4, which just feels so cruel." She said that she, too, learned of the news to follow up season three with season four just a few weeks ago.

According to EW, every cast member on season four's show-within-a-show, the not-really-fictional Everlasting, will be a contestant from a previous season. (Think: Bachelor in Paradise.) This one will be the "All Stars" round. 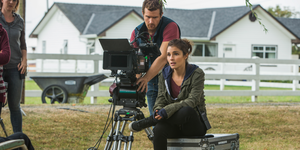 Dirty Tricks From A Reality Show Producer
Wondering What's on Shiri Appleby's Phone?
This content is created and maintained by a third party, and imported onto this page to help users provide their email addresses. You may be able to find more information about this and similar content at piano.io
Advertisement - Continue Reading Below
More From Culture
Author Tahereh Mafi Shares Her Favorite Books
'Virgin River' Season 4: Everything We Know
Advertisement - Continue Reading Below
Could 'Manifest' Come Back for a Fourth Season?
'Bachelor In Paradise' 2021: Everything We Know
Hang On, What's "ROC" at the Olympics?
Obsessed With the Olympics? Read These Books
The 'Friends' Cast Just Dropped Iconic Merch
Twitter Is Obsessed With Greg on 'Bachelorette'
You're About to Hear a Lot About Athing Mu
Meet the Cast of Katie's 'Bachelorette' Season