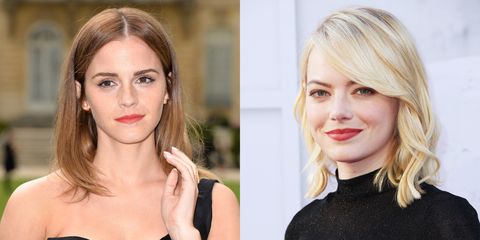 According to Variety's sources, Stone was unable to commit to Little Women because of promotional obligations for her upcoming Fox Searchlight film, award season contender The Favourite.

Tragically, there is no word let on which of the March sisters Watson will be playing. She will, however, be joining a thoroughly star-studded cast, which is reportedly set to include Meryl Streep, Laura Dern, Saoirse Ronan, Timothee Chalamet, and Florence Pugh (all of whom are apparently "in negotiations" to star).

Ronan and Chalamet, of course, starred in Gerwig's critically-acclaimed directorial debut, Lady Bird, and we have a hunch they've been tapped to play Meg and Laurie, respectively. As for the Emmas, the smart money is on their role being the main character, Jo. And, if Meryl comes through and signs on (please, please, please let that happen), she'll probably play Marmee a.k.a Mrs. March, but she could also slay as Aunt March. Really, with all of the talent being courted for the project, there's no wrong combination of actors and characters in this lineup.

If you need a little reminder of how glorious a good Little Women adaptation can be, watch the trailer for the 1994 version (which starred a slew of '90s A-listers, including Winona Ryder, Susan Sarandon, Kirsten Dunst, Claire Danes, and Christian Bale):

We officially cannot wait for this movie.