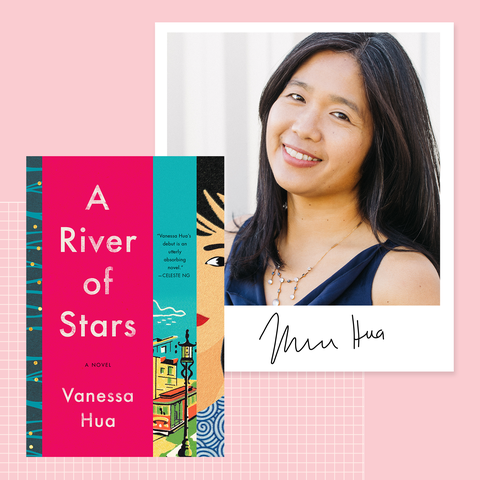 Welcome to MarieClaire.com's Q&A author series—the spot where we ask the #ReadwithMC author-of-the-month five burning questions about her latest book. This month, we're reading A River of Stars by award-winning author Vanessa Hua. If you're interested in the novel and looking for some friends to talk about it with, find out how to participate in MarieClaire.com's new interactive monthly book club here.

While pregnant with her child, Scarlett emigrates from China to America to live in a secret maternity home so her newborn can gain access to U.S. citizenship—an experience many people across the world can relate to, and author Vanessa Hua witnessed in real life. With the issue of immigration currently centerstage in American politics, Hua's debut novel is a timely depiction of chasing the American Dream.

Here, Hua explains the importance of telling Chinese Americans' stories through her novel's exploration of motherhood and identity in a complicated mix of love and adventure.

Marie Claire: What inspired you to write A River of Stars?

Vanessa Hua: I was pregnant and living in Southern California when I started writing the novel and began to hear about these maternity hotels in the suburbs east of L.A. The neighbors were baffled—they were wondering why all of these Chinese women were coming and going out of the homes, why the garbage cans were stacked high with diapers and empty cans of formula. To me, it sounded like a brothel in reverse. It turned out that they were coming here a month or two before their due date so that their children would get U.S. citizenships. Since I was pregnant at the time myself, in one of the most vulnerable times in my life, I wondered what it was like to be so far from friends and family. What did U.S. citizenship mean to these women? Why would they go through so much trouble to come here? That's what inspired me.

VH: We live in a time when immigrants and the children of immigrants are under attack—we’re turned into statistics and stereotypes. When you deny someone their story, you deny them their humanity. A River of Stars really shows that the Chinese-American community is not a monolith—we have very different histories, dreams, ambitions, and flaws. I hope people feel invited into a world that they may not know about, or maybe recognize aspects of themselves in these characters that they’ll want to share this experience with others.

America's immigration story is not just something for the history books—it’s constantly renewed by the latest arrival. Our country takes pride in being a nation of immigrants, but it has a complicated relationship with the people who are still arriving. Because my work looks at these communities it can feel timely, but it’s timeless in the context of America.

"When you deny someone their story, you deny them their humanity."

MC: Is there one character you relate to the most?

VH: They’re all born from my imagination, but I think both Scarlett and Daisy. Someone once asked me, “Which character would you want to hang out with?” In some ways it’s Daisy—the headstrong teenager who has a way with fireballs. But with Scarlett I can really relate to her when she wonders what would happen to her identity once she has kids. Would she still be able to fulfill her dreams and ambitions? Before having kids, I also wondered who will I be? Will I ever write a book? It's true, I now have less time than ever before, but I feel like my heart, mind, and imagination have really opened up since.

MC: Who would you cast as the main characters in a movie?

VH: I love Constance Wu. She was so good in Crazy Rich Asians. Likewise with Michelle Yeoh. At first she came off as the villain, but then you begin to understand her motivations and her ability to change. There's a Mama Fang character in my novel that she would be amazing to play.

You can purchase a copy of A River of Stars here.

Related Story
How to Join Marie Claire's Virtual Book Club
This content is created and maintained by a third party, and imported onto this page to help users provide their email addresses. You may be able to find more information about this and similar content at piano.io
Advertisement - Continue Reading Below
More From #ReadWithMC
Read an Excerpt From 'We Were Never Here'
How to Join Marie Claire's Virtual Book Club
Advertisement - Continue Reading Below
The LGBTQ+ Authors We Can't Stop Reading
'The Other Black Girl' Is Highly Relatable
Read the First Chapter of 'Skye Falling' Here
Life-Changing Books Everyone Should Read
'Crying in H Mart' Is a Must-Read Book of the Year
Read the First Chapter of 'The Other Black Girl'
The New Fiction You'll Fall In Love With
Looking for a Light Escape? Read 'The Dating Plan'