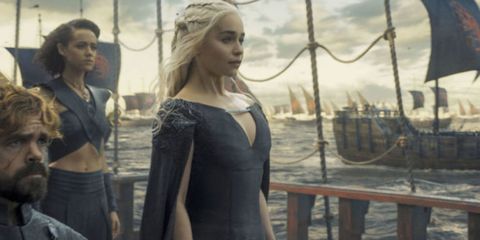 HBO has just bestowed us with the gift of a first glimpse of Game of Thrones season seven.

The network aired a brief 'Coming in 2017' preview during last night's episode of Westworld, and while it's yet to hit the internet, fans were quick to capture and upload a few choice shots from the promo.

The clip appears to show new footage of Sansa in the godswood, as well as Arya on horseback and Jon Snow looking concerned (no change there, then).

We will have to wait quite a while until we finally see season seven, as it premieres in summer 2017—much later than the show's usual spring air date.

However, the show has been teased aplenty, with a number of on and off-set pictures emerging in recent months.

That includes filming in Seville, where the show's cast and crew have been preparing what is set to be the biggest season finale ever.

On top of that, we look set to have reappearances from some familiar faces too, and some long-separate characters look like they could finally meet.

Game of Thrones returns to HBO and Sky Atlantic next summer.

This content is created and maintained by a third party, and imported onto this page to help users provide their email addresses. You may be able to find more information about this and similar content at piano.io
Advertisement - Continue Reading Below
More From Culture
The Top-Grossing Book-to-Movie Adaptations
The Best Shows to Stream on Every Platform
Advertisement - Continue Reading Below
Where Is the Cast of 'Gilmore Girls' Now?
A Look Back at Princess Anne's Life in Photos
Who Is "Queen" Victoria on 'The Bachelor'?
Everything We Know About Matt James
Who Is Rachael on 'The Bachelor'?
Figuring Out Who Wins 'The Bachelor'
Will There Be a Season Two of 'Ginny & Georgia'?
'Detransition, Baby' Is as Good as Everyone Says