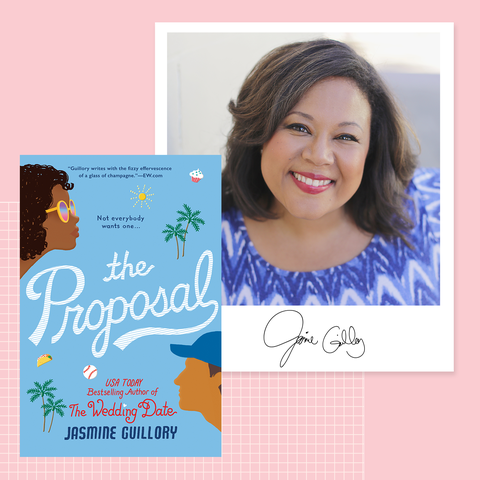 Welcome to MarieClaire.com's Q&A author series—the spot where we ask the #ReadWithMC author-of-the-month five burning questions about her latest book. In November, we're reading The Proposal by Jasmine Guillory. If you're interested in the novel and looking for some friends to talk about it with, find out how to participate in MarieClaire.com's new interactive monthly book club here.

As the world transitions from the summer of engagements to—dare I say it—cuffing season, author Jasmine Guillory is here to tell you that it's okay to say no to the ring...really. In her hilarious new novel, The Proposal, which makes its official debut on October 30, Guillory paints a frank portrayal of the pressure that comes with deciding whether or not to spend the rest of your life with someone (often in public, nonetheless)—and the very real consequences that come with the courage to walk away.

Marie Claire: What inspired you to write The Proposal? Is it based off of your first novel, The Wedding Date?

JG: I got the idea to write The Proposal during the summer of 2016. I was watching the Olympics and there seemed to be a slew of public proposals. One of them happened after a woman won a medal and her boyfriend leapt out of the stands. In my head I was like, Let her have her moment. Can you do that tomorrow? Or at dinner tonight? I've heard people say that they hate proposals because they hate to be the center of attention...I love to be the center of attention and I still hate them because I feel like it puts you on the spot in a terrible way. So then I thought, I wonder what would happen if someone said 'no?'

The man in this book is one of the best friends from The Wedding Date and a few little things [from that story] come up, but the book stands alone. A few people who read The Wedding Date asked me if I was going to write a book for Carlos and I was like 'Eventually, but I don't have any ideas for him yet.' Then I had this idea for The Proposal and I was like, Oh, that's perfect for Carlos.

How do women release their rage at a time like this and come through on the other side?

MC: I have to ask...did you cringe at that Emmy Awards proposal last month?

JG: I wasn't watching the Emmys, but when that moment happened I checked Twitter and had a lot of mentions. Everyone was like 'Did you see it?!' And yes indeed, I cringed. It puts a lot of pressure on the woman not only to say 'yes' when she may not have wanted to, but to react in a specific way that may not have been the natural way to react.

JG: Lately we've been talking a lot about female rage and what happens to women because of what men do to them. That's one of the things that Nik, the woman who gets proposed to, will experience after she says 'no.' Everyone is furious at her—her then-boyfriend was an actor so people knew who he was, plus there was the added racial component because she's black and he's white. She gets harassed and has to figure out how to react to that, so she gets angry. While I was writing the book I asked myself, How do women release their rage at a time like this and come through on the other side? I didn't know what 2018 was going to be like when I wrote this, but it makes the book really relevant now.

MC: If you could be one character in the book, who would you be?

JG: One of Nik's best friends owns a cupcake store. I would definitely be her and bake cupcakes all day!

MC: Who would play the main characters in a movie? Cast your protagonist and antagonist.

JG: For Carlos, definitely the guy who was in Star Wars, Oscar Issac. There are a lot of great black actresses who could be Nik. Gabrielle Union would be delightful. Lupita Nyong'o would also be a lot of fun—I think she could portray Nik's anger in a way that she hasn't really gotten to [play] yet.

I just finished reading a book that's coming out in January called Unmarriageable. It's a play on Pride and Prejudice set in Pakistan and it's a lot of fun. Right now romance is a great escape from the world, but also makes me remember Okay, people can be happy. I feel like that's what we all need—a reminder that there's still joy and love in the world, and sometimes those are the books I need to dive right into.

You can purchase a copy of The Proposal here.

Related Stories
How to Join Marie Claire's Virtual Book Club
Vanessa Hua Opens Up About 'A River of Stars'
This content is created and maintained by a third party, and imported onto this page to help users provide their email addresses. You may be able to find more information about this and similar content at piano.io
Advertisement - Continue Reading Below
More From #ReadWithMC
Read an Excerpt From 'We Were Never Here'
How to Join Marie Claire's Virtual Book Club
Advertisement - Continue Reading Below
The LGBTQ+ Authors We Can't Stop Reading
'The Other Black Girl' Is Highly Relatable
Read the First Chapter of 'Skye Falling' Here
Life-Changing Books Everyone Should Read
'Crying in H Mart' Is a Must-Read Book of the Year
Read the First Chapter of 'The Other Black Girl'
The New Fiction You'll Fall In Love With
Looking for a Light Escape? Read 'The Dating Plan'