The Woolsey wildfire is wreaking havoc on Southern California, burning indiscriminately through neighborhoods in the hills surrounding Los Angeles. The fire, which has spread to over 14,000 acres since it started just two days ago, has ravaged Agoura Hills, the swanky neighborhood that is home to an array of mansions and other luxury homes, including the iconic house used as the filming location for ABC's The Bachelor and The Bachelorette.

As of Friday afternoon, the recognizable home was directly in the path of the flames, according to The Hollywood Reporter. Sources told THR on Friday that the home's back patio was already ablaze and that the flames were moving toward the main house. The lower house on the property, which is often used as production headquarters while the reality series are filming, has been destroyed, THR reports.

The Bachelor is currently in production on Season 23, but it's late enough in the season that production has wrapped at the mansion and is now in the "travel the United States and the world" portion of filming. Although The Bachelor is not currently filming at the Agoura Hills home, that doesn't mean that the fires aren't posing a real danger there.

The home belongs to Marshall Haraden, who built the house in 2004 and lives there with his family when ABC isn't renting it out for filming. Haraden and his family clear out twice a year to accommodate filming, leaving for about 42 each time, according to a Today show profile on the home.

Mike Fleiss, the creator of both The Bachelor and The Bachelorette, tweeted support for both the iconic house and the greater area affected by the wildfires on Friday. 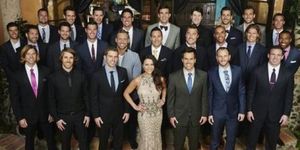 The Word Clitoris Is Too Raunchy for The Bachelor
Sheryl Sandberg Got Ali F to Do 'The Bachelorette'
This content is created and maintained by a third party, and imported onto this page to help users provide their email addresses. You may be able to find more information about this and similar content at piano.io
Advertisement - Continue Reading Below
More From Culture
See Inside Julianna Margulies's Personal Library
Could 'Manifest' Come Back for a Fourth Season?
Advertisement - Continue Reading Below
The Most Unmissable Movies of 2021 (So Far)
The Eternal Sunshine of Juno Temple
Let's Talk About That 'Virgin River' Cliffhanger
Zendaya Shared a Teaser of 'Euphoria' Season 2
'Ginny & Georgia' Season 2: Everything We Know
Wait, Where's Hope in 'Virgin River'?
'Virgin River' Season 4: Everything We Know
The Greatest Comedy Series of All Time