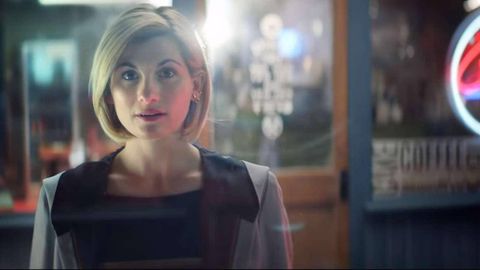 You know that old "riddle" that made the rounds in elementary school, the one that's like, "A kid and their dad are in a car accident and they get to the hospital and the kid needs surgery and the doctor on-call says, 'I can't operate on this boy—he's my son!'" And then the person telling you the riddle is like "HOW IS THIS EVEN POSSIBLE BECAUSE THE DAD DIED IN THE CAR CRASH? And the answer is that the surgeon is the boy's mom and you're supposed to be like, "Wait, what? The surgeon has lady parts? Wild. Mind. Blown."

If there's an entertainment industry equivalent of that "riddle," we're experiencing it right now, because Doctor Who is in the middle of a ratings boom and people are like, "WHOA wait—people are actually watching the Doctor Who with lady parts? Wild. Mind. Blown."

In case you're not the type to follow nerd culture, a quick recap of facts:

Fact: Doctor Who is a popular, long-running science fiction series about a time-traveling wizard who goes on a variety of adventures that involve traveling through time and space with a human companion.

Fact: The character Doctor Who was conceived in a really cool way that makes the show's long run possible. When the character dies, they regenerate in a new body, which allows the show to just cast new actors every few years when the current Doctor feels ready to move on from the show.

Fact: Until the current Doctor, all of Doctor Who's regenerations had been played by men.

Fact: When Whittaker's casting was announced, a sexist subsection of the internet reacted predictably, with angry tweets and a #NotMyDoctor hashtag. Many of these detractors called time of death on the show and basically vowed to never watch again.

Fact: Either they were lying liars or the show pulled in LOT of new fans, because the show's ratings are officially up, by 47 percent in total viewers over Season 10, The Wrap reports. Viewership is also up specifically in the age groups most coveted by advertisers—46 percent in adults 18-49 and 32 percent in adults 25-54.

On Friday, The Hollywood Reporter confirmed that Whittaker will reprise her role as the Doctor in Season 12.

"I really can’t wait to step back in and get to work again," Whittaker told THR. "It’s such an incredible role. It's been an extraordinary journey so far and I'm not quite ready to hand it over yet."

tl;dr: People love the female Doctor Who, which shouldn't be surprising at all, but apparently it is. Yay/sigh.

Related Stories
Why The New 'Doctor Who' Is Revolutionary
In Doctor Who & Star Wars, Women's Stories Matter
This content is created and maintained by a third party, and imported onto this page to help users provide their email addresses. You may be able to find more information about this and similar content at piano.io
Advertisement - Continue Reading Below
More From Culture
Different Pride Flags and What Each Represents
Get to Know Courtney From Season 2 of 'The Circle'
Advertisement - Continue Reading Below
Why 'Fearless' Hits Different in 2021
'The Circle' USA Is Actually Filmed In the U.K.
Pre-Order These Highly-Anticipated 2021 Books
The 25 Most Underrated Films Ever Made
Were the Paintings in 'This Is a Robbery' Found?
'Bridgerton' Season 2: Everything We Know
New True Crime Books You'll Obsess Over
The 'Who Killed Sara?' Cast: Your Complete Guide