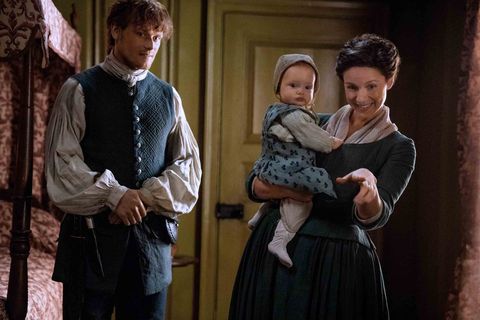 This is a difficult episode to watch. It will be very disturbing to some viewers. There are some good moments: We get to see Claire Fraser perform an impromptu hernia operation before a group of theatre goers and see what a team she and Jamie have become. There's a cameo by the most famous American in history. But we also witness a brutal attack on their daughter Brianna who has traveled back in time and across the Atlantic to try to find them. Here, the five biggest takeaways from tonight's episode.

The episode begins with a desperate Roger Mackenzie (Rik Rankin) searching Wilmington for Brianna (Sophie Shelton). Roger stops a number of people on the street asking if they’ve seen her, including Fergus, Jamie's adopted son, unaware of who he is. When he finally finds Brianna, she’s furious at first that he followed her but finally confesses that she loves him. Her maid, Lizzie (who turns out to be a not very bright busybody) sees them arguing and that sets off a chain of events which will lead to disaster in later episodes. After retiring to a shed for some privacy, Roger proposes that he and Brianna become hand fasted―a Scottish custom in those days that amounted to a temporary marriage. Never has a shed looked more romantic, with a roaring fire which perfectly silhouettes the two lovers. Luckily there's also a few furs spread around to make a roll in the hay a little more comfortable. In a bizarre call back, there are many echoes here of Jamie and Claire's wedding night and their reunion in Season 3. There's nudity, furs and of course, sex. Roger even uses an iconic line from the Reunion―"you are the most beautiful woman I have ever seen." The original scenes were so romantic, the writers must have decided, if it worked once, let’s do it again. But it only illuminated the vastly different connection between the two sets of lovers. The scenes were beautifully shot and there was sweetness to the dialogue between Roger and Brianna. But the sexual spark and deep sensuality that exists between Caitriona Balfe and Sam Heughan in their roles as Claire and Jamie just wasn't there.

THE PLAY'S THE THING

An invitation to a truly terrible play has brought Jamie and Claire to Wilmington at the request of the Governor who’s trying to enlist Jamie's help in putting down an uprising near their settlement at Fraser's Ridge. While they’re there, they visit Fergus and Marsali (Caesar Domboy and Lauren Lyle) and their new baby. In a touching moment, Marsali tells Claire that having the baby changed her. "My heart is so full of love" and she worries that something terrible will happen to him. Claire agrees but doesn't share that she's had a child herself. She does tell Marsali that "you can't protect them from everyone and everything." Uh-oh–a little foreshadowing? Eventually Claire and Jamie find themselves in a theatre with Governor Tryon where they meet Colonel George Washington and his very wealthy wife Martha. And another gentleman, Edward Fanning, who is in constant pain. Claire immediately offers to examine him to the surprise and amusement of the men around her.

ONE SMART WOMAN AND A LOT OF VERY IGNORANT MEN

During the play, the Governor reveals that he has a spy among the Regulators—a group of colonists who are rebelling against high taxes and unscrupulous collectors. He knows they have a plan to rob a coach carrying tax money and he's planned an ambush to arrest their leader, one Murtagh Fitzgibbons who happens to be Jamie's godfather. Jamie is desperate to warn Murtagh and he creates a scene by elbowing poor Edward Fanning in his stomach. As Manning is screaming in agony, Claire declares he must be operated on at once right there in the theatre. The Governor and everyone else say they need a surgeon and scoff at Claire's claim that she is one. Ignoring them all, she takes charge, enlisting the Governor and other men to help hold Manning down while she slits open his abdomen in front of the crowd of theatre goers. It’s created the perfect distraction for Jamie to slip away. Governor Tryon is impressed when he sees Claire's skill, especially after a male doctor shows up and announces "what has hell wrought? All he needed was tobacco smoke up the rear." The Governor dismisses him, "we have no need of you, the lady has it in hand." He's so impressed he doesn't notice that Jamie's been gone the whole time, returning just as Claire places the last stitch.

Jamie's managed to get to Fergus and send him to warn Murtagh with the help of a lift from George and Martha Washington, who have left the play because it's just so bad. Jamie is walking a tightrope. He has to appear to be in sympathy with the Governor who after all granted him 10,000 acres in the mountains. The Governor is sure Jamie will help defend the colony from the upstart Regulators. But Jamie's godfather is their leader. He fought alongside Jamie in Scotland's doomed effort to throw off British rule. And Claire has told him what will happen in the American Revolution, so he knows he can't afford to side with the British. There is a tense moment when the Governor realizes the Regulators have been warned and escaped. He only told a few people about his plot—including Jamie and George Washington. Fortunately, someone remembers seeing Washington leave the theatre early and the blame falls on him. "Never trust a Virginian" in the words of the Governor.

Okay here's where it gets tough. Roger and Brianna's moments of bliss don't last. She discovers that he'd found the same notice of her parent’s deaths that she had―but he kept it from her. They fight, she tells him to go back to Scotland, to go back through the stones. He's so furious he leaves her. Heartbroken, she makes it back to her inn where she’s accosted by a card player who wants her to blow on his ring for luck. It’s her mother's very unique and recognizable wedding ring. She’s stunned and fearful about what might have happened to Claire. The man is Stephen Bonnet, the pirate who robbed her parents. When she offers to buy the ring he says "maybe an agreement could be reached." Bonnet attacks her, she struggles and the actual rape occurs behind closed doors. But it's heard by everyone in the taproom who ignore Brianna's screams for help and the rhythmic banging on the floor. When he’s done, Bonnet gives her the ring. “I’m an honest man for a pirate.” The episode highlights how dangerous the 18th century was for women. Clare has learned to navigate it and succeed, most of the time, on her own terms. Brianna still has her head in 20thcentury Boston.