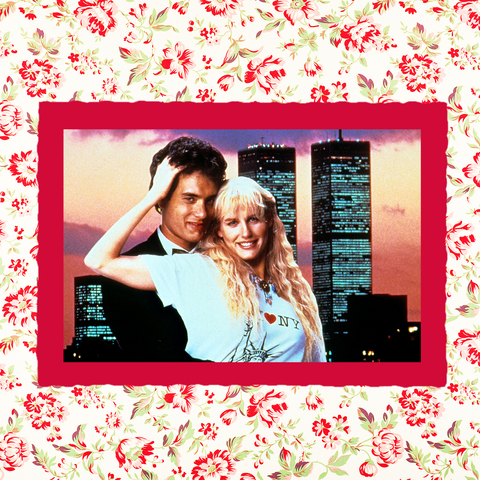 What if I told you that the 2006 teen coming-of-age film Aquamarine wasn’t the first iconic movie to star a mermaid? I know, I needed a second at first too, but in fact, the O.G. fish-out-of-water (literally) tale surfaced with 1984’s mermaid rom-com Splash. And while nowadays creatures like werewolves, vampires, and mermaids are basically the only suitable soulmate options, it wasn’t the case back then. See, before fish sex-centric films like The Shape of Water were winning Oscars, a lot of Hollywood had trouble getting on board with Splash. The female lead role was turned down by almost every famous actress, and the role of her male counterpart went to some unknown actor named Tom Hanks (wonder what happened to him).

But the gamble worked and the movie went on to receive an Academy Award nomination for Best Original Screenplay, paving the ways for lots of gorgeous fish movies as Oscar bait. Now Splash is considered a classic, which means there’s no better time to recast (ooh that works as a fish pun, too!) this particular movie.

If you, like me, find yourself exclusively relating to female characters over the age of 36 who love to unwind with a glass of red (always red) wine, may I suggest The Good Wife? Not only is it the only thing that calms me, but it’s also where I found Graham Phillips, who would be the perfect replacement for Hanks. Not only is he relatively still unknown in the film world, but looking at him makes you think you’re looking at a young Tom Hanks—you see a handsome and trustworthy man who would also totally get involved with a mermaid.

Is there anyone more magical than Kesha? I mean it: She’s inspiring, radiant, and no stranger to making people fall in love with her on the high seas. While she’s never acted before in a major role, pictures of Daryl Hannah in the original film scream Kesha. Plus, who knows? Maybe this could be her A Star Is Born moment. Kesha, there could be 100 people in a room… and people wouldn’t notice an additional person. Please invite me to more industry parties.

Because he primarily serves as comic relief, Freddie needs to be played by someone hysterical and lovable. While no one could replace John Candy, few fit the requirements better than Bobby Moynihan. Also, one of the final plot lines of this movie involves impersonating Swedish scientists, and that basically already sounds like a Saturday Night Live sketch.

Alex Brightman made his debut in the musical version of School of Rock, and while that doesn’t necessarily say “eccentric scientist,” it proved he has a comedic vibe that could totally walk in the footsteps of Levy. Since he’s already had to grow a beard for his Tony-nominated role, all he has to do is just go an extra week without shaving and he’s set for Dr. Walter Kornbluth.

More Rom-Com Coverage, Right This Way
It's Rom-Com Week on Marie Claire!
Who Should Star in a ‘Charade’ Reboot?
Who Would Star in a Reboot of ‘Harold and Maude'?
This content is created and maintained by a third party, and imported onto this page to help users provide their email addresses. You may be able to find more information about this and similar content at piano.io
Advertisement - Continue Reading Below
More From Culture
What Makes an Olympic Moment?
Team USA Fencers Protested Their Teammate
Advertisement - Continue Reading Below
Hang On, What's "ROC" at the Olympics?
Suni Lee Just Scooped Up Gold in Tokyo
Movies Everybody Should Watch At Least Once
'Virgin River' Season 4: Everything We Know
'Love Is Blind' Season 2 Is Coming!
Simone Biles' Sister Is Her Fiercest Champion
Simone Biles Quotes to Live By
Could 'Manifest' Come Back for a Fourth Season?