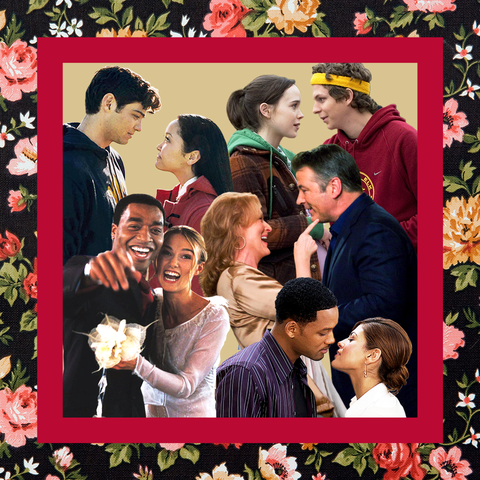 The term “romantic comedy” seems specific, and yet knowing exactly what fits the mold can be tricky. Sure, it’s a movie that’s romantic. And of course it’s funny. But what about movies that have an element of both, but aren’t focused on either? Or, are focused on a lot of other things, too, like friendship or self-discovery? It all starts to get a bit...murky. So earlier this week, we asked you to let us know what you feel makes the cut.

The answers were a little surprising. For instance, Coming to America, whose IMDB description is literally “an African prince travels to America to find a suitable woman to marry” only 26 percent of readers thought was a rom-com; the remaining 74 said it was just a com (yes, Eddie Murphy is hysterical, but come on, the man is looking for love!). Meanwhile, readers were split practically right down the middle as to whether such famous flicks as Breakfast at Tiffany’s (57 percent yes versus 43 percent no) and The Princess Diaries (42 to 58) should be included in the genre. Perhaps the problem is we’re all dealing with a different definition. We couldn’t help but wonder: What is it that makes a romantic comedy a romantic comedy?

According to Chloe Angyal, who holds a Ph.D. in media studies with a focus on the romantic comedy, the distinction is fairly straight-forward: “To me, the definition is a comedic movie, with a romance at its core, that ends with the couple together,” she says. When Harry Met Sally? Check. 10 Things I Hate About You? Check. Notting Hill? Check.

But when you accept that definition as a standard, a lot of movies fall out of the genre, too. Bridesmaids, for example, which explores themes of love and marriage, in fact wouldn’t really count. “It’s not really about getting the guy,” says Angyal of the Kristen Wiig comedy. “It’s about her and her relationship with her friend. He’s a human bonus prize, and you can still imagine a happy ending to that movie, even if they never get back together.”

Or Legally Blonde, a funny movie in which the action is spurred by a breakup—does it fit the definition? “I think Legally Blonde is borderline,” Angyal says. “But I think there’s a strong argument, given that the catalyst for the movie is her getting dumped, and she meets a new man relatively early on who’s pretty present throughout.” Plus, another happy ending in which, we can at least assume, Elle said yes to Emmett’s proposal. (Sorry for the spoiler if you haven’t seen it, but the movie came out in 2001—the statute of limitations on spoilers is up.) On the other hand, the movie is largely about Elle coming into her own as a lawyer and the ending is plenty happy even if she passes on a big white dress and a bouquet toss.

Of course, a happy ending isn’t completely necessary for a movie to be a rom-com. The central relationship in My Best Friend’s Wedding, for instance, is never realized—but the movie is considered a classic of the genre. “A rom-com with an unhappy ending is a rom-com that only Julia Roberts could get made in 1997,” says Angyal. “Studios weren’t taking that risk on anyone except Queen Julia.”

While I could sit around all day and ask Chloe which movies count as rom-coms and which don’t, what’s more important is the reason we even need a formal definition of a romantic comedy in the first place. I’ve been thinking about this a lot while working on Rom-Com Week: Why can’t The Notebook (which 47 percent of you said belongs in the genre) just be a romantic comedy? I know by our definition it technically isn’t (it’s not a comedy!), but why can’t we just say it is? It’s just a chick flick, why are we using a frickin’ scalpel here?

And the answer is that if we allow ourselves to lump any movie whose aim is to appeal primarily to women into a single genre with no regard to nuance, then we’re actually embracing just how little mainstream culture thinks of women in general. It’s implicitly giving permission to that culture to write all women as stock characters, like the personality-adjacent BFFs in those formulaic mid-aught rom-coms. By forcing an actual definition of what qualifies as a romantic comedy, we insist that women’s stories are worthy of some thought.

To All The Boys I've Loved Before, excellent example of the genre's bright future.
Getty ImagesShutterstock

The last year or so leading up to the Rom-Com Renaissance in which we currently find ourselves has shown us that this genre amounts to more than the sum of its tropes. Rom-coms can speak to the experiences and hopes of people from any background, age, race, income level, or sexual orientation (see: To All The Boys I've Loved Before; Love, Simon; What Men Want)—but only when the people writing them and the studios producing them take the genre seriously enough to make these considerations. And they should: When done correctly, a romantic comedy can be a box office money-maker and a genuine cultural touchstone. (Ahem, Crazy Rich Asians.)

Okay, so then, what about movies with male leads, that appeal to men, but still fit within our aforementioned standard (comedic movie, romance at core, happy ending)? Forgetting Sarah Marshall (which more than a quarter of readers said was not a rom-com) was written by and stars Jason Segel, and features plenty of Judd Apatow Extended Universe actors making boyish sex jokes, but it’s also genuinely a comedy and centrally about love. Though many women like it, it seems pretty geared toward men. Just look at this trailer (which, I must say, doesn’t do the movie’s actual thoughtfulness and humanity much justice) and tell me they weren’t banking on mostly cishet dudeguys buying tickets:

But rather than disqualifying Forgetting Sarah Marshall for its more “bro comedy” elements, it’s important to keep male-centric romantic comedies in the canon. The moment we exclude movies like The Best Man Holiday or Knocked Up, we reinforce the idea that love stories are only of interest to women. But men need and desire romantic love, too. By excluding them from the genre, we're not exposing men to celebrations of vulnerability and sensitivity. We’re saying that finding true love is something worth aspiring to for women, but not for men. But shouldn’t all humans aspire to connect with other humans on a deep and personal level? Is this why toxic masculinity exists? Because men haven’t seen Notting Hill?

Maybe we’re overthinking it, but with a resurgence in interest from studios to make romantic comedies, it’s important to do so with thoughtfulness and intentionality. We don’t want a repeat of the rom-com’s downfall, in which clever tropes gave way to rote ones and in which any excitement, spark, or beauty was completely sucked out via the vacuum of laziness. Let’s talk about romantic comedies as a legitimate genre. Romances, too. And let’s also acknowledge when a woman-centric film fits into a longstanding male-centric genre, like how Girls Trip is definitely a buddy comedy. Ultimately, it’s about breaking down the partition that unnecessarily separates art specifically for women from art for everyone. The moment we do, all art is going to be much better for it.

More Rom-Com Coverage, Right This Way
Judy Greer on Casey's Life After '27 Dresses'
Waterproof Mascaras That'll Outlast Your Ennui
Is All Rom-Com Love Based on a Lie?
This content is created and maintained by a third party, and imported onto this page to help users provide their email addresses. You may be able to find more information about this and similar content at piano.io
Advertisement - Continue Reading Below
More From Culture
'Bachelor In Paradise' 2021: Everything We Know
Hang On, What's "ROC" at the Olympics?
Advertisement - Continue Reading Below
Obsessed With the Olympics? Read These Books
The 'Friends' Cast Just Dropped Iconic Merch
Twitter Is Obsessed With Greg on 'Bachelorette'
You're About to Hear a Lot About Athing Mu
Meet the Cast of Katie's 'Bachelorette' Season
Blake Moynes Has a Thing For 'Bachelorette' Leads
'Skye Falling' Should Be on Your Summer TBR List
What Makes an Olympic Moment?