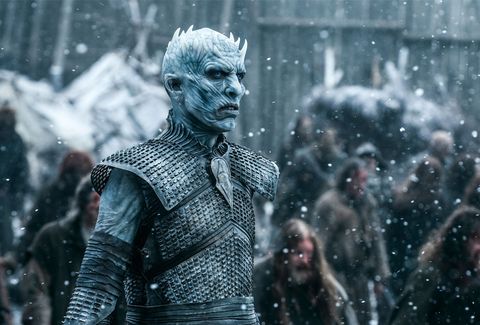 It's safe to say viewers aren't exactly loving the new Bran on Game of Thrones.

The youngest surviving Stark sibling (RIP Rickon) finally made it back to Winterfell for that long-awaited family reunion this season, only to proclaim he is no longer Bran, but instead the much more annoying Three-Eyed Raven. 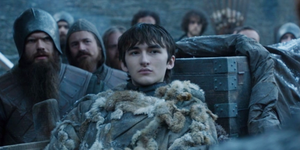 The Actor Who Plays Bran Explains That Reunion

Since then, he has mortally offended Meera and confused the hell out of Sansa, as well as Arya Stark.

However, if this fan theory turns out to be correct, it could see Bran become the real Stark sibling of many faces. Soz, Arya.

In one of the weirdest but also most plausible fan theories we've seen to date, Reddit user turm0il26 makes the argument that Bran Stark is the Night King himself.

The theory would see three-eyed raven Bran travel backwards in time and warg his way into the man who later becomes the Night King, with the goal of stopping the Children of the Forest from creating the White Walkers in the first place.

However, this ultimately backfires when they don't believe him and pierce the first man's heart with Dragonglass while Bran is still trapped in his body (turm0il26 argues Bran does try to jump ship here and travel back to the future, but too bad. Because he stayed too long in the past, he's stuck there—which Brynden and Jojen did warn him about previously), thus creating Bran, the Night King.

While watching the events unfold, Bran is unusually tense right from the off, even though at this point, he can only see things at a distance.

Oh, and then there's this confession from Leaf that has us almost convinced.

BS: "It was you? You made the White Walkers?"

L: "We were at war. We were being slaughtered. Our sacred trees cut down. We needed to defend ourselves."

See, Leaf literally TOLD Bran she was defending herself from him.

Of course, this conflicts with other theories out there that suggest Bran himself is the legendary Brandon Stark who built the wall and after whom he is also named (according to Old Nan's stories, anyway).

Nonetheless, we're shook all the same.

This content is created and maintained by a third party, and imported onto this page to help users provide their email addresses. You may be able to find more information about this and similar content at piano.io
Advertisement - Continue Reading Below
More From Culture
Every 'Squid Game' Hint You Missed Along the Way
Meet the Cast of Netflix's 'Squid Game'
Advertisement - Continue Reading Below
Listen to the Best New Love Songs of 2021 (So Far)
Shalita Grant Is Hilarious in 'You'
'Squid Game' Season 2: Everything We Know
Breaking Down the 'You' Season 3 Finale
Get Ready for Some Incredible Books in 2022
Fans Are Wondering If Madre Linda Is Real
So, Who Wins Michelle's Season?
Win Halloween With One of Those Costumes for Duos