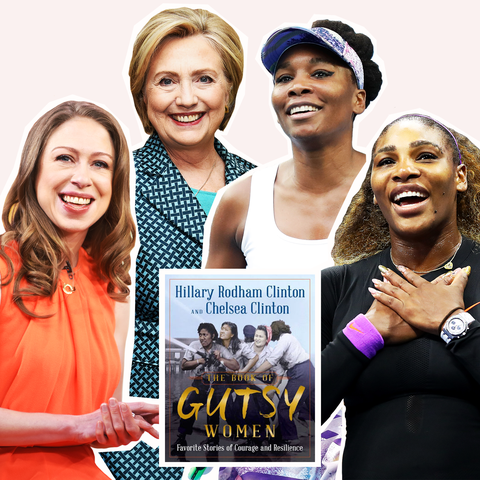 Hillary and Chelsea Clinton know a thing or two about being "gutsy women," considering one of them was Secretary of State and a presidential nominee and the other is an author and global health advocate (amongst many other accomplishments). Now, the mother-daughter duo is shining a spotlight on the women who have inspired them along the way, putting their brilliance together on paper for the first time in The Book of Gutsy Women: Favorite Stories of Courage and Resilience (out tomorrow).

The tome includes portraits of groundbreaking women throughout history—from Shirley Chisholm to Greta Thunberg—telling their inspiring stories, with commentary from the Clintons. MarieClaire.com received an exclusive sneak peek at Hillary and Chelsea's recounting of tennis superstars Serena and Venus Williams' legacy, including how the sisters have, quite literally, changed the game for women everywhere.

Venus and Serena Williams have a particular talent for shutting out the noise and nonsense and focusing on what really matters—whether it’s smashing records, winning titles, or advocating for people who will never have the kind of platform they do.

Over the years, they’ve had far too much practice honing this talent. For decades, the two world-class athletes who helped redefine the sport of tennis have dealt with sexism, racism, and body shaming. Reporters and commentators have tried to undermine their athletic abilities (as they have with so many other women athletes—especially black women athletes) by suggesting that they’re not women at all, or that they’re using performance-enhancing drugs. After Serena pushed back against an umpire’s suggestion that she was cheating in the 2018 U.S. Open final against Naomi Osaka (“I don’t cheat to win,” she protested, “I’d rather lose”) and became visibly frustrated on the court, an Australian newspaper published a racist cartoon depicting the events. (“Well done on reducing one of the greatest sportswomen alive to racist and sexist tropes and turning a second great sportswoman into a faceless prop,” tweeted Harry Potter author J. K. Rowling.)

Contrary to what their performance on the court might suggest, Venus and Serena aren’t superhuman. They have both spoken publicly about how painful it is to be on the receiving end of ugliness and hostility—and about their determination not to let it distract them from doing what they do best. “I felt defeated and disrespected by a sport that I love,” Serena wrote in Harper’s Bazaar of her experience at the 2018 U.S. Open. “One that I had dedicated my life to and that my family truly changed, not because we were welcomed, but because we wouldn’t stop winning.”

From the time they were toddlers in the early 1980s, Venus and Serena, with their parents’ support, were logging hours practicing on the public courts of Los Angeles. “Venus was older and playing tournaments,” recounted their sister Isha. “Venus was enrolled in this particular tournament, and Serena wasn’t. Unbeknownst to my dad and mom, Serena sent in the application and signed herself up for the tournament. Who does that? ...Even then, she wanted to compete.” After a few years, the family moved to Florida so that the girls could get the elite-level coaching their talent and determination deserved. It paid off; both turned professional in the mid-1990s, before they graduated from high school. Venus led by example, pushing her little sister to work harder, never letting her win a friendly game. “My first job is big sister and I take that very seriously,” she said later.

"I was lucky enough to cheer for the Williams sisters in person during the 2000 Olympics and at multiple Grand Slam matches in the years since. I’m always inspired by their focus on the court and their support for each other there and everywhere else." —Chelsea Clinton

Venus and Serena played with tenacity and heart, chasing after every ball, delivering powerful serves and ground strokes. In 1997, Venus defied expectations when she became the first unseeded U.S. Open women’s finalist, meaning she had not been ranked among the seeded players deemed most likely to win. In 2000, Venus won two Olympic gold medals in Sydney: one in singles and one in doubles, with Serena. That same year, Venus won the U.S. Open and Wimbledon. The next year, she did it again. In 2002, Serena followed suit.

The years that followed weren’t easy for the Williams sisters. Their half-sister Yetunde Price was murdered in a shooting in Compton, California, in 2003. Venus and Serena were distraught. “She was a wonderful person,” Serena said. “We’re dealing with it however we can. Some days are better than others.” More than a decade later, the two opened the Yetunde Price Resource Center in Compton, to honor their sister’s memory and help people who don’t have the same support network the Williams family did.

In 2008, Venus and Serena returned to the Olympics, this time in Beijing. Once again, they took home the gold in women’s doubles. Four years later, in London, they won again. During the 2017 Australian Open, Serena, who had once again been rising steadily through the ranks, beat Venus to win her twenty-third Grand Slam title, and earned the ranking of number one in the world. (She has spent more than three hundred weeks, spread over fifteen years, ranked number one.) As she often has, Serena credited her sister for her success. “There is no way I would be at 23 without her. There is no way I would be at one without her. She is my inspiration. She is the only reason I am standing here today and the only reason that the Williams sisters exist.”

That same year, mid-tour, Serena announced she was pregnant. She gave birth to her daughter, Alexis Olympia, in September 2017—meaning she won the Australian Open while pregnant. Afterward, she courageously shared the nightmarish complications she had experienced after delivering her daughter by C-section. Because she had a history of blood clots, she was hypervigilant in watching for the signs of clotting after the surgery. When she felt a familiar sensation, she spoke up. The nurse suggested that the pain medication had left her confused, but Serena knew exactly what was happening. She insisted on getting scans, which confirmed her fears. She wound up having two more surgeries.

I have loved watching Serena champion equal pay for women, athletes and nonathletes alike. I shared her fabulous open letter in November 2016 with friends and on social media...She is a role model, for all of us and for our daughters and sons. —Chelsea Clinton

“I was terrified,” she said later. “It was a whole new kind of fear.” She has since helped bring attention to maternal mortality in America, where seven hundred women die every year as a result of complications from pregnancy or childbirth. Even though maternal mortality around the world has been steadily decreasing over the last several years, it’s actually rising in the U.S. As she has done all her life, Serena is turning a crisis into an opportunity to raise visibility around an important issue that affects too many women, especially women of color.

Serena is also continuing to speak out, with her typical candor, about the challenges women face on the court and off. Every woman who has felt that she was trying to play by ever-changing rules empathized when, after Serena wore a black catsuit during a match, the French Tennis Federation president decided to change the dress code at the French Open. Serena explained that, in addition to making her feel like a superhero, the catsuit’s compression helped to prevent blood clots. He stuck by his decision: “It will no longer be accepted. One must respect the game and the place.” Why is it that nothing seems to make some people more uncomfortable than a woman in pants? Serena laughed off the controversy and continued to not only accept but also celebrate herself. After her daughter was born, she posted a picture on Instagram, proudly declaring: “She has my arms and legs! My exact same strong, muscular, powerful, sensational arms and body.” At the 2018 U.S. Open, she showed up in a tennis tutu. When she came back to the French Open, she was wearing a bold outfit covered in the French words for “Mother, Champion, Queen, Goddess.”

As for Venus, in addition to continuing to compete at the highest levels of tennis, she continues to build on her creative talents. She founded her own women’s activewear brand, and she directs her own interior design firm. Though she has talked about the challenges of building a new career, as she says, “I don’t focus on what I’m up against. I focus on my goals and try to ignore the rest.” In the end, it’s that ability to tune out the distractions and zero in on chasing their dreams that has made the Williams sisters two of the greatest athletes in the world.

Related Stories
Chelsea Clinton on the Persistence of the MSD Kids
Hillary Raised $1.5 Million for the Border Crisis
This content is created and maintained by a third party, and imported onto this page to help users provide their email addresses. You may be able to find more information about this and similar content at piano.io
Advertisement - Continue Reading Below
More From #ReadWithMC
New True Crime Books You'll Obsess Over
'This Close to Okay' Will Put You in Your Feels
Advertisement - Continue Reading Below
Read 'The Dating Plan' With Us in April
How to Join Marie Claire's Virtual Book Club
Read These Books for Inspiration in 2021
What It Was Like to Write a Book With RBG
25 Great New Memoirs to Add to Your TBR Pile
'Detransition, Baby' Is as Good as Everyone Says
'This Close to Okay' Is Our March Book Club Pick
New Books by Black Authors to Read ASAP