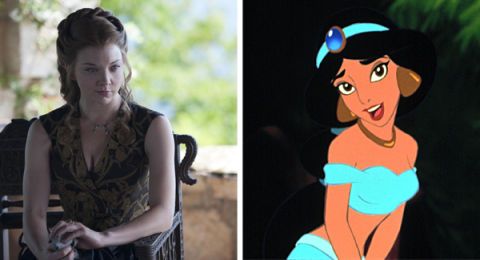 Arya Stark's Disney Princess counterpart is most definitely Mulan. Bold, fiercely independent, and the bravest of the bunch, Arya won't allow herself to be a victim of gender stereotypes. She learns to fight, first out of interest, later out of necessity, and proves that she can take care of herself.

When Arya and Brienne meet in the finale of season 4, we almost never stopped to think how similar the two are and how Arya is a reflection of Brienne. We definitely never anticipated that their paths would cross, so this moment was totally satisfying. As Arya is sailing to Bravos, we can't wait to see what's in store for her as she is now truly on her own.

Cersei and the Evil Queen of Snow White share some definite similarities. Power-hungry and selectively protective of her family, Cersei will stop at nothing to see Tyrion destroyed. Cersei is extremely calculating and seemingly without a compassionate bone in her body — Spiteful and vindictive are words you could use to describe either character.

Like Belle, Sansa is smart, independent, and inquisitive. At first she is relatively innocent, but gains some wits when she realizes what she's up against after witnessing her father murdered and being the object of Joffrey's "affection." Things turn around for her a bit when she is wed to Tyrion and at least has his protection, but all bets are off now that Littlefinger has sunk his teeth in.

Jasmine is arguably the sexiest of the Disney Princesses, as Margaery certainly knows how to leverage her good looks to get what she wants. After charming Joffrey with ease, she knows she must also gain Tommen's trust if she is ever to be queen. While Jasmine refused an arranged marriage in favor of true love, Maergery makes the most of her unions, knowing that ultimately, she wants power and this is the only way for a woman to truly get it.

Wild, a free spirit, and harboring an intense forbidden love, Ygritte and Pocahontas share some of the same struggles — Their beloved even share a name! Unfortunately, Jon Snow and Ygritte don't quite live happily ever after.

Dany is one GOT character that can't really be put into any mold. She rules an entire people, conquers cities, and is the mother of dragons (that apparently she can't control anymore). While the Disney princesses are no doubt fierce and independent, no one quite measures up to Daenarys.

The Emotional Stages of Watching Game of Thrones

14 Game of Thrones Quotes That Turned Us Into Superfans

The 7 Moments That Got Us Hooked on Game of Thrones

This content is created and maintained by a third party, and imported onto this page to help users provide their email addresses. You may be able to find more information about this and similar content at piano.io
Advertisement - Continue Reading Below
More From Culture
Meet the Cast of Netflix's 'Squid Game'
We're Getting a Season 4 of 'Manifest'
Advertisement - Continue Reading Below
Emma Mackey From 'Sex Education' is a Rising Star
The 'Sex Education' Season 3 Ending, Explained
Action Movies With Strong Women Front and Center
'The Great British Baking Show' Is Coming Back!
'Bachelor In Paradise' Spoilers: Your 2021 Guide
'Bachelor In Paradise' 2021: Everything We Know
Films With Plot Twists You'll Never See Coming
Mimi Keene Stole the Show in 'Sex Education' S3