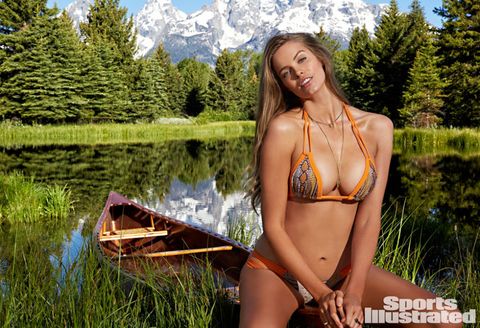 If you clicked on a "First Plus-Size Model in Sports Illustrated Swimsuit Issue"-type headline yesterday and felt sorely disappointed to learn that Ashley Graham isn't in the magazine editorially—she's in an ad—you'll like this: Robyn Lawley just announced that she's an official SI Rookie.

Lawley, who is Australian and also the designer of a line of ace swimwear that fits sizes 10 and up, will appear alongside women such as Erin Heatherton, Ashley Smith, and Emily DiDonato. The sweetest part of the whole deal, besides the fact that it actually, historically happened? SI isn't treating her differently from the other girls at all.

Rejoice! Target Is Coming Out with a New Plus-Size Range

Chelsea Peng I'm Chelsea Peng, the assistant editor at MarieClaire.com.
Advertisement - Continue Reading Below
More From Culture
Who Will Be on 'Bachelor in Paradise' in 2020?
An Investigation Into the Next 'Bachelorette'
Advertisement - Continue Reading Below
'The Bachelor' Has Already Finished His Season
Can We Talk About Kelly's Mom From Love Is Blind?
The Best Reactions to the 'Love Is Blind' Finale
Hilary Duff Hints About 'Lizzie McGuire' Reboot
Ryan Murphy's Producing a Love Letter to Hollywood
This Is When the 'Love Is Blind' Finale Will Drop
Will Gigi and Damian Actually Get Married?
Princess Latifa's Great Escape