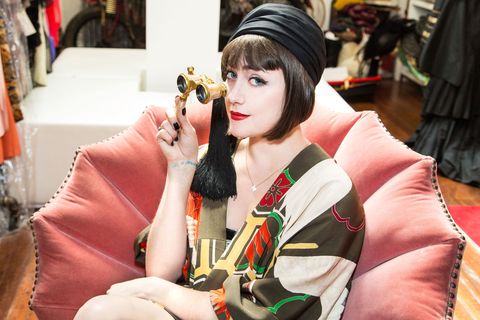 Just one look at Hailey Tuck, with her raven black bob, red cupid's bow lips, and waist-cinching frocks, makes it clear she's from another time. It's even more evident when she speaks, saying things like, "the joie de vivre is intoxicating," with her signature Texas twang. But it's not until you hear the 24-year-old sing that you can truly grasp what an old soul she really is.

Growing up in Austin, Texas, Tuck was raised on a diet of "1920's jazz, vintage dresses, and black and white movies." At the age of 18, her lifelong love of old-world charm inspired her to drop everything and move to Paris, where she became a fixture performing on underground scene—including four sold out shows at the iconic Le Duc des Lombards.

After touring through Europe and Asia for the better part of 2014, Tuck has released a new EP Delancey Street, on which she puts her Jazz Age spin on The Jackson 5's B-side track, "All I Do is Think of You"; The Beach Boy's "Caroline, No"; and Cole Porter's "My Heart Belongs to Daddy." But what's perhaps most thrilling is "Seems You'd Wanted Me,"the first original song Tuck has written. It's a beautiful/melancholic ballad that will resonate with anyone who knows a thing or two about lost love.

Ahead of her album showcase at Sleep No More's Manderley Bar at The McKittrick Hotel earlier this month, we spent the day with Tuck as she visited some of her favorite New York City haunts, shopped for her onstage look, and sipped pre-show cocktails. Listen to Tuck's EP and see our day with the soon-to-be-famous performer in photos, below:

The day began at the Merchant's House Museum on Lower East Side, which is still furnished as it was in the 1800's. "I love it because it's a labor of historical love from a really kind group of people—like jazz!" explains Tuck.

Next, we stopped at Tuck's favorite store in the universe: New York Vintage, which is a favorite of many, including Beyoncé, Lady Gaga, and Michelle Obama. It's a treasure trove of sartorial delights, including this bird's nest fascinator.

Naturally, she had to take this sequined fringe number for a spin. If Tuck could describe her style in two words they'd be "hectic" and "theatrical."

"I love feeling like I'm in a costume—don't look too close into that Dr. Freud!" she jokes. "Mostly I shop in thrift stores and dusty vintage shops, but recently I got to catch the LA opera costume sale, and let's just say I checked my entire credit card balance in the line."

"Besides enjoying a fun splurge on some vintage YSL and Valentino, they were kind enough to let me play dress up and loaned me this vintage Norman Norell for my show," says Tuck.

Knowing full that the best part of wearing an LBD is accessorizing it, she opted for these intricate mini-carousel earrings that pop against Tuck's ice blue eyes.

Our first stop for drinks was at a bar called Leave Rochelle Out of It on the Lower East Side. Next up, we went to the Experimental Cocktail Club on Delancey Street, which just so happens to be the title of Tuck's EP.

"It's nostalgic for me because the first time I ever performed jazz in public was in a scantily clad art nouveau costume at a party at Curio Parlour in Paris, which has the same owners," explains Tuck.

After a lovely day of roaming NYC, we make it the intimate venue and Tuck dazzles the crowd by performing all the songs off of Delancey Street, as well as few of her most beloved covers—including The Zombies' "Tell Her No" and Maroon 5's "Sunday Morning"—like you've never heard it before. Fun Fact: she sings the latter number as a nod to the band's lead guitarist, James Valentine, who was her older sister's longtime boyfriend.

"He dated the wrong sister," she joked onstage.

You can purchase Delancey Street on iTunes, here.

The 30 Best Songs We Heard at SXSW