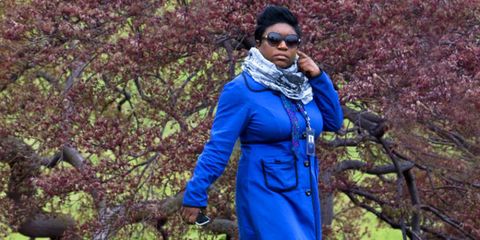 Deesha Dyer has been selected for probably the coolest job in the White House (besides, you know, being the President): social secretary, meaning she plans all the official WH events.

But she's not just some regular ol' D.C. type. Dyer's got a pretty badass background full of gems like:

1. She got her degree in women's studies

2. She's been working for the White House since she became an intern six years ago

3. She wrote articles about rap music for publications like Philadelphia Citypaper

4. She created a hip-hop AIDS program and has also volunteered for the Youth Health Empowerment Project, CARE advocacy, and served as a board member for Action AIDS

Dyer is replacing Jeremy Bernard, the first man and first openly gay person to serve in that role. And she'll start with a bang: Her initial task will be planning a state dinner for President Xi Jinping of China later this year.

"Deesha shares our commitment to a White House that reflects America's history, highlights our culture, and celebrates all Americans," President Obama said in the statement announcing her new position. "Michelle and I look forward to working with her in this new role as we welcome visitors from across the country and around the world to the People's House." For her part, Dyer said she was "constantly inspired by the openness, diversity, and traditions of this Administration."

In an interview with Refinery29, the Philadelphia native said she hoped her timeline can show others that they can do anything. "Just keep going. We all have things in life that happen to us, and if you just sit in the moment, it can bring you down sometimes—but you just have to keep going...I hope when people read my story, they realize that they can get past [their challenges]."

Meet the First Female Deputy Director of the CIA!

Samantha Leal Senior Web Editor I'm Sam, the senior editor at MarieClaire.com.
Advertisement - Continue Reading Below
More From Culture
The Best TV Shows on Hulu Right Now
The Documentaries You Can't Afford to Miss in 2020
Advertisement - Continue Reading Below
'Killing Eve' Season 3 Review: What's Old Is New
A Super Pink Moon is Coming April 7
Pre-Order These Amazing Books Coming Out in 2020
The 8 Best Rom-Coms of 2020
Got 10 Minutes? Here's What to Watch on Quibi
We Could Be Getting More 'Tiger King'
HBO Is Making Iconic Shows & Movies Free to Watch
Tim Gunn & Heidi Klum Also Wear PJs to WFH