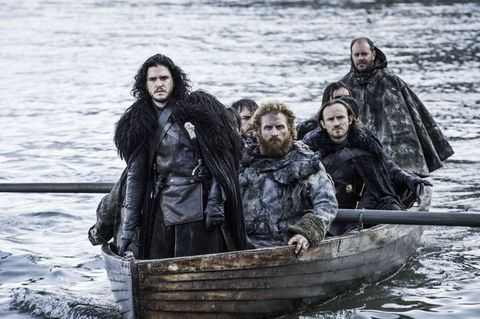 1. Don't ever admit you're wrong, even if that means getting slapped with a wooden spoon. You'll be fine.

What Happened: In an effort to force a confession from Cersei Lannister, the High Sparrow's friendly nun deprived the queen mother of water and Crest whitening toothpaste. On top of that, she kept whacking her with a spoon. Cersei refused to fess up.

The Lesson: So what if you're guilty of some bad stuff (like, say, murder and incest)? It's nobody else's business. Plus, who needs water anyway?

What Happened: To serve the Many-Faced God, Arya Stark assumed the guise of Lana: expert oyster salesperson. For her first assignment, she masterfully investigated a really exciting case of insurance fraud.

3. Grab someone by the head and berate them until they give you answers.

What Happened: Sansa Stark caught Theon/Reek slipping up when describing how he killed "those boys." After yelling at him for a bit, he told her some hopeful news: turns out he only murdered a couple of random farm boys—brothers Bran and Rickon Stark are still alive!

The Lesson: Someone refusing to tell you the truth? Leave the wooden spoon at home, and break that person down the old-fashioned way: lots and lots of yelling.

4. If you're not interested, don't just friend-zone him—banish the poor sap.

What Happened: After rotting in friend-zone hell for multiple seasons, Ser Jorah Mormont was exiled by Daenerys Targaryen...again. Apparently, the best gift of all time (Tyrion!) just isn't enough to make up for treason.

The Lesson: Who cares if he's your most devoted follower? Make your feelings clear by banishing him and breaking his heart.

5. When up against a small army of undead children, just give up.

What Happened: While battling the Night's King's army at Hardhome, the wildling's chieftess kicked ass—until she encountered a pack of zombie kids. As soon as she saw them, she was like, "Oh heeeellllll no," and stopped fighting altogether.

The Lesson: Undead or not, fighting elementary-school kids is just messed up. Save yourself a lifetime of emotional trauma, and just let them tear you apart. But don't worry, you'll be reanimated as a member of the blue-eyed White Walker army! Life goes on.