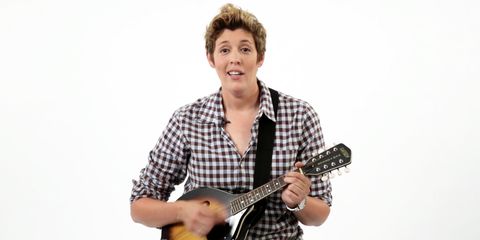 Across the board, the number one suggestion I got from Taylor Swift fans for my #SallyforSwiftSquad project (which, if you're just now jumping in and didn't gather from the headline, is my attempt to become friends with Taylor Swift) was this: "Make a video." Taylor, they explained, loves videos.

I already knew she loves music.

So why not combine the two?!?

And thus, as my Hail Mary pass in my earnest quest to get Taylor's attention, I wrote her a song. An original song. About Taylor and me and why we should be friends.

People, if this doesn't seal the deal, I don't know what will.

It's distinctly possible that I may horribly embarrass myself. I'm okay with that. I just hope Taylor watches it, likes it, and knows it's sincere.

A special thanks to badass feminist media activist Rachel Sklar, who gave me valuable input on the lyrics—and to amazing singer/songwriter Jill Sobule, who helped me turn it all into actual music (stay tuned for our "extra acoustic" outtake video soon, with Jill playing banjo and singing harmony).

And thanks to the clearly professional backup dancers in the video: my CNN colleagues Brooke Baldwin, Alisyn Camerota, Anthony Morrison, and Lindsay Perna; Arturo Castro of Broad City fame (also check out his brilliant new Comedy Central show, Alternatino); Millennial superstar and "Flip the Script" host Liz Plank; and hilarious comedy writer and producer Michael Rubens.  I'm grateful they all literally put their butts on the line for me—and then shook 'em! And shook 'em hard.

Plus thank you to Jessica Pels at Marie Claire and Laura Gherardi, Ryan Simmons, and the entire Hearst video team. Thanks for taking a girl and her dream of starring in a Taylor Swift homage music video and making it come true.

And for anyone following my quest, there have been some encouraging signs lately. Most specifically, official squad member Jaime King mentioned me in a powerful essay she wrote about the grueling gauntlet of public opinion—and then tweeted the link to me, alluding (I think!?) to her being the connection between me and Taylor.

But I've always wanted to earn this, as much as possible, on my own. There's no such thing as pure meritocracy, folks, and as I mentioned in my first essay here, I've had a bit of a privileged leg up from the get go. (Being a CNN commentator will do that for ya.) Even still, I don't want Taylor Swift to be friends with me because some friend of a friend of Jay Z told her to be (for the record, I don't know Jay either, but someone offered to introduce us so he could introduce me to Taylor). I want Taylor Swift to be friends with me because she wants to be—because her Ruler of the Pop Culture World status doesn't preclude her from being real or having real friendships, even with admittedly dorky people like me. That, as I discussed in my second essay, is the real essence of confidence.

Let's see if it all pays off.

Follow me on Twitter, and keep tabs on my Swift-related exploits through #SallyforSwiftSquad. I'll be reporting back soon to let you know what happens next. Fingers crossed!