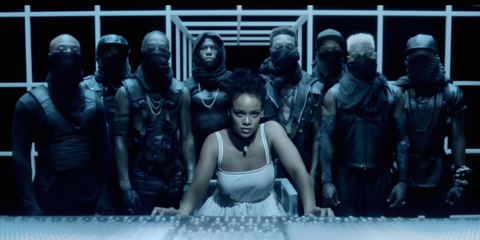 Update, 11/29: While we still don't know when her 8th studio album, ANTI, is going to drop, Rihanna has made waiting slightly easier by giving us a small glimpse into the next era of her career—which seems to be way less "Diamonds" and a lot more "Disturbia."

The singer teased her upcoming LP by posting a dramatic new video on Twitter—with a rather ominous caption:

There's more than meets the eye. The next #ANTIdiaRy room is now open: https://t.co/uJ0CLlhoaS pic.twitter.com/I8AmmtTr9K

So what does The Exorcism of Bad Gal RiRi have to do with her new music? The world may never know. (No, seriously, if we don't get a release date soon, we might just give up.)

Original post, 11/23: Every other commercial during Sunday evening's American Music Awards was whispery little girls's voices promoting Rihanna's forthcoming album or Rihanna following creepy small children down a dark hallway, so you know she had to have had something big up her fur-trimmed sleeve. This is it—part of it, at least.

According to an announcement posted on her Instagram, the Grand Poobah of pot will go on tour from February 26 in San Diego to August 12 in Zurich, with Travis Scott and the Weeknd opening for her in the U.S. and Big Sean joining her in the U.K.

But what about the nervous-making kids? Has anyone actually taken the time to look for the keys in her interactive mobile-game thingy? WHEN DOES THE ALBUM DROP?! You'll know when it's time. Sorry.