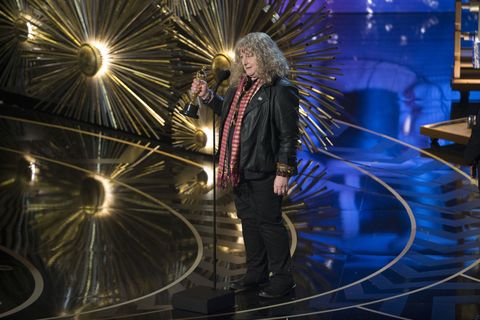 Update, 3/2: Alejandro González Iñárritu, one of the people in the viral Vine, has responded, and it turns out it was all a misunderstanding; he did clap for Beavan, but that moment wasn't shown on camera. Here's his full statement:

"I think Jenny Beavan is a masterful costume designer and very deserving of the Oscar for Mad Max: Fury Road.  By editing and omitting the full reality and suggesting I felt anything but admiration is mean-spirited and false.  What you don't see in the 10 second clip being circulated is my applause for Jenny as she ascended the stairs to the stage. I've learned a lot this awards season… that I should never cross my arms when I am sitting down."

And a closer look of him, yes, actually clapping:

Original post, 3/1: On Sunday night, Jenny Beavan took home the Oscar for her costume design on Mad Max: Fury Road. The prize was totally deserved, since she made Furiosa and the gang look incredibly badass out there in the desert. But apparently, she didn't go over well when it came to the fussy Academy audience.

A viral Vine shows Beavan walking up to the stage in front of a row of stuffy dudes, including The Revenant director Alejandro González Iñárritu, who refuse to clap or even smile for her as she walks by. The clip has been viewed more than seven million times. Just look at their expressions when they see her coming, and how they change once she looks at them.

To be clear, there's definitely a chance they did clap at first, but had stopped by the time she walked by them. But still, the etiquette is that you clap until the winner gets on stage, hand cramps be damned.

This isn't the first time that Beavan has invited scrutiny at an awards show. She won the same prize at the BAFTAs earlier this month, and presenter Stephen Fry joked about her wardrobe. "Only one of the great cinematic costume designers would come to an awards ceremony dressed as a bag lady," he said. Fry got so much backlash that it convinced him it was time to quit Twitter. (The two are actually close friends and Beavan insists she wasn't offended.)

Backstage after her big Oscars win, she addressed the controversy and talked up her own outfit that night. "I really don't do frocks, and I absolutely don't do heels. I simply can't wear them," she said. "I've got a bad back, and I look ridiculous in a beautiful gown." Her faux-leather jacket was emblazoned with Swarovski crystals as an homage to Mad Max. "I just like feeling comfortable," Beavan said. "And I'm sorry, as far as I'm concerned, I'm really dressed up."

Beavan has previously said that Charlize Theron taught her how to have enough confidence to take a compliment. But really, she showed the world what confidence means by rocking this awesome of a look on the Oscars stage.