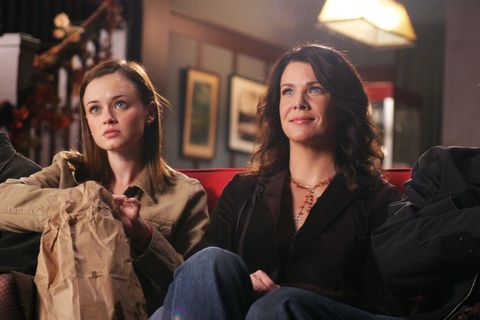 Thanks to Team Jess vs. Team Logan, Gilmore Girls is a surprisingly divisive show (it's like, pick a side, guys). But if there's one thing that unites us in these dark, Dean-filled times, it's that we are all Rory. And we were all Rory before saying the sentence "We are all [insert random celebrity here]" was a thing.

Gilmore Girls aired from 2000 to 2007, when most of its viewers were high school girls the same age as the youngest Gilmore. Many of us faced the same classic teenage experiences: falling in love for the first time, getting into fights with our parents, leaving home for college, subsisting on a diet of pizza and Mallomars, and having everyone in our small Connecticut town be weirdly obsessed with us. (Okay, that last one is a lie).

Rory was inarguably influential—if she cued up the new Arcade Fire on her iPod, so did we. If she dusted off a copy of Memoirs of a Dutiful Daughter, we were right there with her. But Gilmore Girls ended when Rory was on the cusp of being not a girl, not yet a woman (thanks, Britney Spears), and we never got a chance to hear her thoughts on topics that are so important to us today. Is she voting for Hillary Clinton? Is she writing op-eds about abortion access in Texas? (Reminder: She's a journalist.) Does she have thoughts on gun control, LGBTQ rights, or Black Lives Matter? Or will her circa-2016 conversations with Lorelai be limited to safer subjects, like the rise of Squad Goals?

"If you re-watch 'Gilmore Girls' (which you should, because duh), it's clear that Rory and Lorelai are feminists."

If you re-watch Gilmore Girls (which you should, because duh), it's clear that Rory and Lorelai are feminists. Between The Bangles obsession and Rory's reading list full of classics like Susan Faludi's Backlash: The Undeclared War Against American Women and Elizabeth Wurtzel's Bitch in Praise of Difficult Women, it's clear that these are girl's girls. But the show was incredibly limited by a) the teenage audience that was its core-viewership, and b) the fact that it aired on The WB and then The CW.

Sure, Lorelai taught Rory how to unleash her inner Beyoncé and be a strong, independent woman (note the pro-choice poster in her dorm room)—but on the flip side, she didn't even consider having an abortion when she became pregnant as a teen. In fact, Christopher's parents floated the idea and it was met with shock and dismay, which is fine when viewed with a "her body, her choice" lens, but a little odd when taking into account Lorelai's feminist ideals. This isn't to say you can't be a feminist and choose to have a child via unplanned pregnancy—but with the tense reaction to even *identifying* abortion as an option, there was a definite sense that it was taboo in the early aughts Gilmore Girls narrative. (Which was likely a product of the show airing in a decade when they were rarely showcased on TV, let alone TV for teens.)

"Will Rory's biggest life challenge be deciding which one of her high school boyfriends she should hook up with?"

But the thing is, it's 2016. Female-focused network TV shows regularly touch on "divisive" subjects like abortion, sexism, and racism, while shows like Girls full on tackles them. Yeah, you might say, "Girls is on HBO and caters to millennial women," but Gilmore Girls is on Netflix and it also caters to millennial women—due in part to the fact that we've all grown up. To that point, we can totally see 30-year-old Rory being friends with Hannah, Marnie, Shoshanna, and Jessa—especially considering that they're all 30-somethings who graduated from elite schools and moved to big cities.

Like her imaginary Girls friends, Rory would probably have had several sexual partners, one near-brush with an STD, at least a couple on-line dating accounts, and a sassy knit sweater that says "A Woman's Place Is in the White House." But will the Gilmore Girls revival accurately portray her journey (as privileged and overwhelmingly white as it may be), or will Rory's biggest life challenge be deciding which one of her high school boyfriends she should hook up with? The fact that Jess, Dean, and Logan are a part of the revival makes us think the show might operate in a time warp where the only huge change in Rory's womanhood is her age as opposed to the vocalization of her beliefs.

"Maybe it's fine to put our opinions on hold and take a trip back to a world where one Planned Parenthood poster is enough to satiate our thirst for girl power."

It's frustrating to think about Rory's character suffering from the confines of her own show, but maybe Gilmore Girls doesn't have to turn into some white-girl social justice manifesto that incites a bunch of think-pieces (ahem, like this one). Maybe it's fine to put our opinions on hold and take a trip back to a world where one Planned Parenthood poster is enough to satiate our thirst for girl power. It almost seems unfair and preemptively show-ruining to have entirely new expectations of grown-up Gilmore Girls, but it'll be pretty hard to look the other way if Rory is 30 going on 16 in the bougiest town in America—especially when racial and gender diversity in Hollywood make almost-daily headlines. There's no clear answer, but it's definitely something to think on while praying that Dean and Rory don't get back together. (Seriously, please no.)