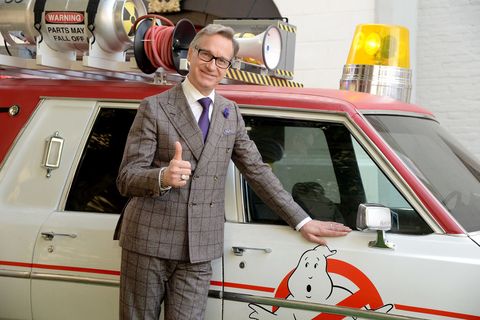 A lot of things happened in 2015 (the rise and fall of Leonardo DiCaprio's man bun, for one), but Jennifer Lawrence's essay on the Hollywood wage gap had to be one of the most transformative. The think piece sparked a huge conversation about gender diversity in Hollywood, and it looks like we're finally seeing a tangible change from male power players in the industry—starting with Paul Feig.

The Ghostbusters director announced that he'll add an equality clause to all future film contracts that will require minor roles to have gender-balanced casting. This means background scenes won't be a massive boys club, which makes sense given that women make up more than half the U.S. population, ahem.

"I think we need to set these things in stone so it forces everybody to think that way," Feig recently told the Associated Press, adding that "the roles still aren't there for women." He also noted that female directors haven't been given the same opportunities he's been given due to the Hollywood gender bias, which couldn't be more true.

There's a lot of work to be done before the playing field is truly even (equal pay would be nice...), but consider this one small step by mankind for womankind.

Mehera Bonner Contributor Mehera Bonner is a news writer who focuses on celebrities and royals—follow her on Instagram.
This content is created and maintained by a third party, and imported onto this page to help users provide their email addresses. You may be able to find more information about this and similar content at piano.io
Advertisement - Continue Reading Below
More From Culture
'You' Season 3 Is Adding a Menacing Character
'Fate: The Winx Saga' Season 2: Everything We Know
Advertisement - Continue Reading Below
Who Is Michelle Young on 'The Bachelor'?
Who Is the Voice on the Radio in 'WandaVision'?
Everything We Know About Matt James
How to Join Marie Claire's Virtual Book Club
Watch UCLA Gymnast Nia Dennis' Epic Floor Routine
Fans React to 'Euphoria' Special 'Part Two: Jules'
'Detransition, Baby' Is Our Feb Book Club Pick
'The Bachelor' Is Back!