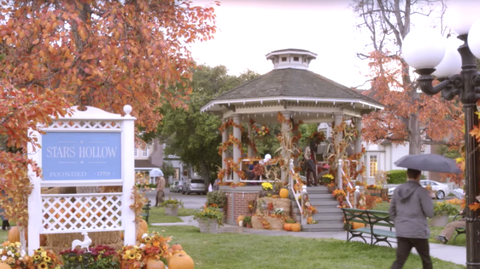 Because the siren call of coffee and Mallomars just couldn't be resisted, MarieClaire.com hopped in a Jeep over the weekend (JK, it was a Honda) and drove to Stars Hollow, AKA Washington Depot. Why? Four words: Gilmore Girls Fan Fest, where stars and fans collided to celebrate everyone's favorite show in its birthplace. As you might expect, we learned a ton of Gilmore Gossip. Get ready.

The Independence Inn is real, only it's real name is The Mayflower Grace. In fact, Amy Sherman-Palladino was inspired to write Gilmore Girls on a trip which included a visit to the gorgeous hotel, and bonus: the chef 100 percent adheres to the Gilmore Girls Diet.

"The inn was so beautiful. And everything looked like it was covered in sugar. It was just like one of those eggs that you stare in at Easter," Sherman-Palladino said of the town. "If I can make people feel this much of what I felt walking around this fairy town, I thought that would be wonderful."

Melissa McCarthy's headshot sealed the deal. Here's a brief description from casting director Mara Casey on the magical perfection that was McCarthy's photo: "I remember Melissa's picture. She was a wee bit off to the side. Kinda cut-off, black and white. With a beautiful bright smile. And the picture wasn't quite in focus." Classic.

Here's an example of one of McCarthy's headshots. Again, classic.

Seriously, no one knows who Lane's dad is. Including writer/producer Sheila Lawrence, who was literally like, "who was Lane's father?" when asked. This mystery will never be solved, the end.

Amy Sherman-Palladino had a strict no-midriff rule. Remember how low rise pants and belly shirts were super popular in the roaring aughts? Yeah, Amy was having none of that. The simple reason? Connecticut is cold AF. "If you were in Connecticut in winter, you'd be freezing," Costume supervisor Valerie Campbell said. "You wouldn't wear a bare midriff." FYI, this rule was taken so seriously that part of Campbell's job was telling Alexis Bledel and Lauren Graham to pull down their shirts while filming.

Mr. Robot has a cameo. By which we mean Rami Malek, who you might remember as "that dude in Lane's bible studies class."

Jared Padalecki had zero competition, because duh, he's amazing, Team Dean etc. Apparently, Sherman-Palladino was so impressed by 17-year-old Padalecki that she wanted to hire him on the spot—though she did have other actors try out for the part just to keep the studio happy.

Gypsy is gay. At least according to Rose Abdoo, who played her. "She's got a crush on Lorelai," Abdoo told the Fan Fest audience. "Gypsy loves Lorelai." Considering Lorelai is the most lovable ever, this makes tons of sense.

Hep Alien is still a band. And yes, they will sing the Gilmore Girls theme song if you ask nicely enough.

Jackson's chemistry with Sookie was so 🔥, they brought him on as a regular. "The chemistry we had was instant," Jackson Douglas said during a panel with the Gilmore Guys. "I just kept coming back and coming back, and it just grew based on our chemistry with each other."

Ummm, Caesar went to Chilton with Rory? Aris Alvarado can be spotted at Rory's high school dance, and confirmed that his character graduated before starting work at Luke's. File under: *That feeling when the fan theory you're obsessed with turns out to be true.*

@AR1STOCRAT is this you on @GilmoreGirls before your were Caesar?! pic.twitter.com/fqAsCjdHxa

Kirk's favorite job? Announcing the hockey game. Or, to quote the man himself, "I really enjoyed being the announcer at the hockey game." Let's go ahead and re-live the memories:

And finally, most of the cast are Team Jess. Here's the official breakdown:

Jackson Douglas (Jackson): "No one's good enough for her."

Mike Gandolfi (Andrew): "She's a powerful woman who doesn't need a man to define her."

Mehera Bonner Contributor Mehera Bonner is a news writer who focuses on celebrities and royals—follow her on Instagram.
This content is created and maintained by a third party, and imported onto this page to help users provide their email addresses. You may be able to find more information about this and similar content at piano.io
Advertisement - Continue Reading Below
More From Culture
The Cast of Grand Army Are BFFs IRL
A Look Back at Princess Anne's Life in Photos
Advertisement - Continue Reading Below
Who's in 'The Queen's Gambit'?
'After We Collided' Stars Play Trivia With Us
'The Crown' Season 4 Is Coming So Soon
It's Been a Weird Year for 'The Bachelorette'
Who Plays Townes in 'The Queen's Gambit'?
The Best Korean Dramas to Get You Hooked
To Save Victims, We Must Dismantle Purity Culture
Will There Be a Season 2 of 'The Queen's Gambit'?