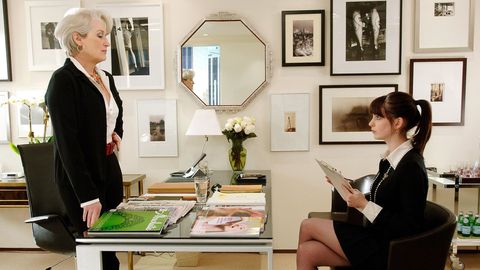 The musical will reportedly be based as much on Lauren Weisberger's best-selling 2003 novel as on the movie. There's no word yet on who could possibly be stepping in to fill Streep's shoes.

"Reimagining The Devil Wears Prada for the musical theater is super exciting," said Elton John. "I'm a huge fan of both the book and the feature film and a huge aficionado of the fashion world. I can't wait to sink my musical teeth into this hunk of popular culture."

John, of course, has a long history of penning successful Broadway musicals—The Lion King and Billy Elliot are among his back catalog—while Rudnick wrote the musical adaptation of Sister Act.

Emma Dibdin Contributor Emma Dibdin writes about television, movies, and podcasts, with coverage including opinion essays, news posts, episodic reviews and in-depth interviews with creatives.
This content is created and maintained by a third party, and imported onto this page to help users provide their email addresses. You may be able to find more information about this and similar content at piano.io
Advertisement - Continue Reading Below
More From Culture
Queen of the Screen
The 12 Sexiest LGBTQ+ Movies Around
Advertisement - Continue Reading Below
53 Wild and Completely Iconic Vintage Porn Films
Dale Moss Is a Super Important 'Bachelorette' Star
It's Been a Weird Year for 'The Bachelorette'
Political Books to Read Ahead of Election Day
The Sexiest Movies on Amazon Prime
HBO Is Giving Fans 2 Special 'Euphoria' Episodes
What to Know About Tayshia's 'Bachelorette' Cast
Clare Crawley's 'Bachelorette' Cast Is Out