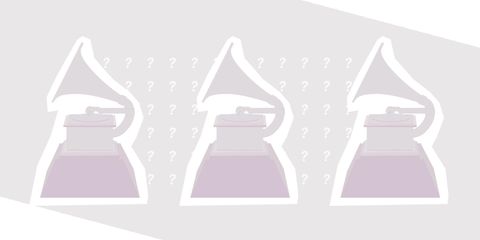 When you're contending with new albums from Rihanna, Drake, Beyoncé, Kanye, Solange, and Adele, the stakes are so much higher for music—which is why this year's Grammys will be one to remember. And even though it feels like music continually gets more progressive (this year was an especially political moment for many musicians), it's unclear whether the votes will reflect a changing industry at-large (upsets of the past include memorable Beyoncé snubs). Below, our predictions for the lucky artists who will take home a gold trophy this year, plus the many bruised egos who actually deserve the win.

Album of the Year

A Sailor's Guide To Earth—Sturgill Simpson

In conclusion: As much as Lemonade deserves this album for its critical success, Adele's star power (she sold 8 million albums versus Beyoncé's 1 million—blame Tidal?) might earn her the title no matter what.

Record of the Year

In conclusion: Quick note on the distinction between "Record of the Year" and "Song of the Year." This category honors the overall production value and recording while "Song of the Year" honors the singers and songwriters directly, so we're hoping that Beyoncé bags it for the truly squared away-down-to-the-minute-details perfection that was "Formation."

Song of the Year

"I Took A Pill In Ibiza"—Mike Posner, songwriter (Mike Posner)

In conclusion: I'm going to have to give it up to Beyoncé this time, too. Adele's "Hello" ballad was beautiful, but Beyoncé's was pure epic, with layers upon layers of meaning (an ode to her black heritage) and visceral language.

Will win: The Chainsmokers

Should win: Chance the Rapper

In conclusion: By all accounts, from the sheer amount of streams Chance the Rapper's album had this year (141 million, far more than any of his contenders), to how superior musically this album is, he deserves the award. Do I have faith that the system will put the right artist on top (*cough* remember Macklemore *cough*) this year? Not really. This might be the Nickelback of EDM's year.

In conclusion: Even though Adele's or Bieber's album may have had some home-run individual hits, ya girl Ariana Grande's album as a package was fire, churning out radio-friendly earworm after earworm.

Should win: "Love Yourself"

In conclusion: If Justin Bieber's going to win anything, it should be for his stripped-down performance of "Love Yourself" which truly took a note from Drake's playbook on assuming the scorned lover role (no shade, this song is great). But Adele's in her own category performance-wise, and she's a darling of the Grammy Awards, so she will probably take home the award instead.

In conclusion: Let's be clear—no duo could hold a candle to Rihanna and Drake's sexually charged Song of the Summer "Work."

Should win: A Moon Shaped Pool

In conclusion: Bowie nostalgia might tip the scales in favor of the last album he released before his death, though Radiohead's latest was another prolific album to add to their shelf and *should* nab the award.

"Turnin' Me Up"—BJ The Chicago Kid

Will win: "Needed Me"

Should win: "Needed Me"

In conclusion: Though Solange's latest album was a darling of critics (and rightfully so!), Rihanna's was phenomenal, especially in stand-alone performances like "Needed Me."

In conclusion: *Unpopular opinion alert*—as a whole, I still think Anti is stronger than Lemonade in the R&B field but will probably be overshadowed by sales and the critical success of Bey's album.

In conclusion: Newcomer Desiigner rocketed to fame from the success of his chart-topping trap anthem "Panda," and broke streaming records for it, too.

Should win: "No Problem"

In conclusion: Don't get me wrong. "Ultralight Beam" is a straight-up religious experience, from the evangelical choir to the fantastic Chance the Rapper verse. But this was truly Chance the Rapper's year and I'm secretly hoping he gets to take home the award for his own song (huh huh).

And the Anonymous Nobody—De La Soul

The Life of Pablo—Kanye West

Should win: The Life of Pablo

In conclusion: Though TLOP and Coloring Book are strong contenders (and definitely less controversial than Drake's sampling habits), Drake will likely take home the award for its record-breaking (and instantly viral) hits.

A Sailor's Guide To Earth—Sturgill Simpson

Will win: A Sailor's Guide to Earth

Should win: A Sailor's Guide to Earth

In conclusion: Sturgill Simpson's A Sailor's Guide to Earth was the only country album nominated for "Album of the Year," and if he doesn't strike gold there, I'm thinking the progressive country artist will take home the big prize here. His eclectic and refreshingly modern take on the genre sounds unique to anything I've heard from country in a while.

Advertisement - Continue Reading Below
More From The Grammys 2020
How to Get Demi Lovato's Look From the Grammys
Go Bold or Go Home Was the Grammys' Nail Vibe
Advertisement - Continue Reading Below
Why Isn't Beyonce at the 2020 Grammys?
Watch Demi Lovato's Emotional Grammys Performance
Alicia Keys' No-Makeup Look at the Grammys Is Gorg
Alicia Keys Covers 'Someone You Loved'
Priyanka Chopra Pays Tribute to Kobe at Grammys
Lizzo Opens the Grammys With an Epic Performance
Sophie Turner Stuns In a Gothic Look
Ariana Grande Is a Disney Princess at the Grammys