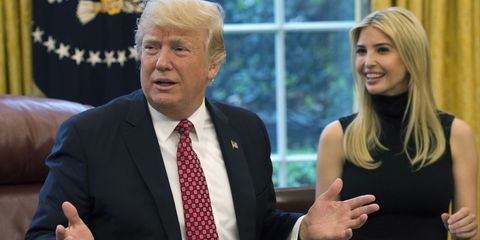 Ivanka Trump has had her work cut out for her at the G20 Summit, and has even been photographed filling in for her father at important meetings. Saturday morning also saw Ivanka help promote the Women's Entrepreneurship Facility Initiative, a World Bank fund for female entrepreneurs.

Speaking at the launch, President Trump discussed his daughter, in light of her busy schedule at G20, and the criticism she often faces. The president said, "If she weren't my daughter it would be so much easier for her. That might be the only bad thing she has going, if you want to know the truth."

It's unusual to hear the president downplay his own power and success, in order to emphasize his daughter's talents. While life would undoubtedly be "easier" away from the White House, Ivanka appears to have embraced the opportunities that have come her way since her father became the president. And onlookers around the world have been astounded by the access she has had during exclusive meetings and events, like the G20 Summit, by standing in for President Trump.

In an interview with Fox & Friends in June 2017, Ivanka said, "I try to stay out of politics... I feel blessed just being part of the ride from day one and before... I instead like to focus on areas where I can add positive value, where I can contribute to the agenda." Clearly, Ivanka continues to find a place for herself in her father's White House, and at crucial political events around the globe.

Amy Mackelden Weekend Editor Amy Mackelden is the Weekend Editor at HarpersBAZAAR.com, where she writes about entertainment, celebrity news, beauty, and fashion.
This content is created and maintained by a third party, and imported onto this page to help users provide their email addresses. You may be able to find more information about this and similar content at piano.io
Advertisement - Continue Reading Below
More From Culture
'The Undoing' Is Based on a Beloved Book
Who Is Hugh Grant's Wife?
Advertisement - Continue Reading Below
Queen of the Screen
The 12 Sexiest LGBTQ+ Movies Around
53 Wild and Completely Iconic Vintage Porn Films
Dale Moss Is a Super Important 'Bachelorette' Star
It's Been a Weird Year for 'The Bachelorette'
Political Books to Read Ahead of Election Day
The Sexiest Movies on Amazon Prime
HBO Is Giving Fans 2 Special 'Euphoria' Episodes