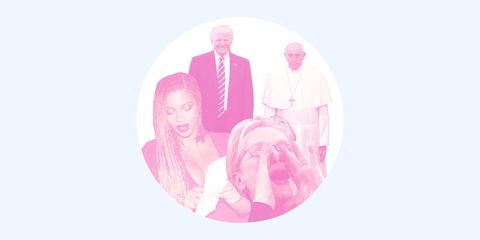 If Nero fiddled as the world burned, we in 2017 fidget-spinned—and made memes about it. But humor has always been a weapon against injustice, and when do we need a succinct expression of the human condition more than in times of discord? Here, in case you've been living without an internet connection/want to relive the year/are making a time capsule for future archaeologists to dig up, the most crucial memes of 2017.

i can't stop watching that complex video. i need bella hadid as a GPS voice. "homeboy make a left or it is quiet."

From the Complex video that brought you the iconic catchphrase "Homeboy's gonna, like, [millennia pass, humankind evolves to have gills] get it" comes memes upon memes marveling at how Bella Hadid talks. (Like Steve Buscemi pretending to be a youth, to reference another meme.) At least it's not quiet for dope homeboys on the Internet.

What "making it" looks like—if you're a stock photo. By now, there must be hundreds of variations on the theme (meme) of someone neglecting something for something else. So relatable, so versatile.

Do you know Big Shaq? If not, where've you been? He's brought us "2+2 is four, minus one, that's 3," but also "man's not hot" and "the ting goes (skrr)," all in one of the best rap records of the year. Still not sure if this is one long art performance piece on the tropes of the roadman, but it brings joy, so support.

People think this child-eating clown is hot, so there's that for our collective mental health. But at least they've also taken to the popular "down here we [insert thing preferable to reality]" sewer-climbing bit of the film as a nostalgic device.

the floor is an oasis reunion pic.twitter.com/TjOwj2TS9A

In 2017, adulting is hard, and the regression is real. This is why grown people are playing that childhood game where you jump onto surfaces not touching the ground, even though real molten rock would definitely sear right through a cushion, Sandra. This trend then evolved to reference things celebrities and politicians avoid, like awards shows (Justin Bieber) or the veracity of climate change (Republicans).

Related Story
Twitter\'s New "The Floor Is" Meme Is Everything

"I actually invented Lemonade so it should be free." pic.twitter.com/k8Yq3aGTLa

New Beyoncé photos = the meme factory goes into overdrive. Unaccustomed to the sight of their idol doing something as mundane as ordering from a menu, the internet put all sorts of imperious, Beyoncé-y words in her mouth.

Like complete the phrase but with more Britney lyrics. And quotes. And jingles. (This one really shows that some things, like Britney, are truly universal.)

Origin: the Met Gala, during which Diddy, perhaps in need of a break from posing, sat on the steps. Used to convey extra-ness.

And they say memes are a waste of time—this one's got politics. When the president and the pope met at the Vatican, the latter's stern expression launched a thousand interpretations, including the example, which accomplishes cross-meme population with a classic movie-trope model that rose in popularity two years ago. 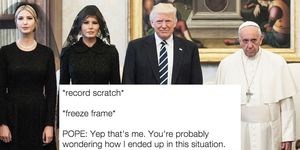 trump 100% made a wish when he touched the orb pic.twitter.com/S0TlxgxtBY

Half derision, half sheepishness.

This is the weirdest thing you will watch all day 😂😂 (@neptuneprince)

Nobody can quite put her finger on why Snapchat's savior has struck such a chord with the public—probably because it's dopey but stupid but inexplicably hilarious—but it's here, and the weirder the context, the better.

You know this one.

After the soda company reduced the solution to World Conflict to...their soda, the internet went in. The historical ones are the best, which again demonstrates the informational potential of memes.

It's been a weird year.

Chelsea Peng I'm Chelsea Peng, the assistant editor at MarieClaire.com.
Advertisement - Continue Reading Below
More From Culture
Who Is 'Bachelor' Contestant Alayah Benavidez?
The Best Korean Dramas to Get You Hooked
Advertisement - Continue Reading Below
The Best New Music of 2020 (So Far)
Listen Up: Gripping New True Crime Podcasts
'The Bachelor' Has Already Finished His Season
Unmissable Horror Movies Coming Out This Year
Who Is 'Bachelor' Peter's Mom Talking About?
Sarah Coffin Might Be a 'Bachelor' Frontrunner
Who Is 'Bachelor' Contestant Victoria Fuller?
Meet the Star of 'The Bachelor's ChampagneGate