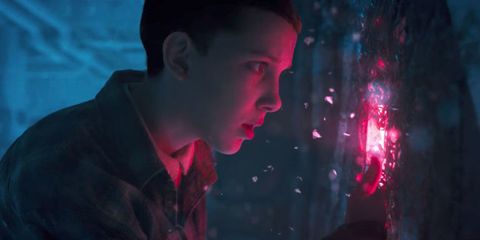 This weekend, the cast and creative team behind Netflix's juggernaut Stranger Things took the stage at San Diego Comic-Con to tease Season 2—emphasis on tease.

Moderator Patton Oswalt realized that literally any question about Season 2 was a potential spoiler, but there was no need to worry about that—Netflix trained the Stranger Things team to expertly avoid spoilers.

One part of the presentation did offer some clues about Season 2, though—the new trailer. Set to "Thriller" and full of fantastic '80s references like Dragon's Lair, the trailer is full of potentially-exciting tidbits to dissect.

Will is still having those weird flashes from his time in the Upside Down.

It looks like the show's monsters will be bigger than ever this season.

Mike stares longingly at an empty desk in class while Hopper tells us in voice over that "nothing is going to go back to the way that it was."

Looks like Will isn't returning to school and his normal life.

There's trouble in teen love paradise for Karen and Steve.

Will is being tested (/possibly studied).

So...could he be the next Eleven?

The trap from their Ghostbusters Halloween costumes is seen shaking on its own in one clip. Alternate theory: It's Eleven playing a prank on them.

Everyone gets in the fight this season.

Unless there's another reason for all the guns.

Karen will go through some really emotional moments.

And there's a very good chance it's tied to #JusticeforBarb.

Eleven is experiencing some Upside Down flashes of her own.

And now there's a glowing portal, so let's just add that to the list of mysteries about this show.

Watch the full trailer below:

Kayleigh Roberts Kayleigh Roberts is the weekend editor at Marie Claire, covering celebrity and entertainment news, from actual royals like Kate Middleton and Meghan Markle to Hollywood royalty, like Katie Holmes and Chrissy Teigen.
This content is created and maintained by a third party, and imported onto this page to help users provide their email addresses. You may be able to find more information about this and similar content at piano.io
Advertisement - Continue Reading Below
More From Culture
The Sexiest New Movies of the Year
A Look Back at Princess Anne's Life in Photos
Advertisement - Continue Reading Below
Where Is the Cast of 'Gilmore Girls' Now?
'The Bachelor' Is Back!
Who Is "Queen" Victoria on 'The Bachelor'?
Matt James' 'Bachelor' Cast: Everything We Know
Get to Know Serena Pitt From 'The Bachelor'
The Best Lesbian Movies Streaming on Netflix
Listen to the Best New Love Songs of 2021 (So Far)
Who Is Christine Chiu on Netflix's 'Bling Empire'?