It's been a very, very long week for anyone who's even vaguely invested in the future of America, but Kendrick Lamar is here to remind you that not everything is garbage. He just dropped his new music video for "LOYALTY.", featuring Rihanna, and it is everything your Friday needs. 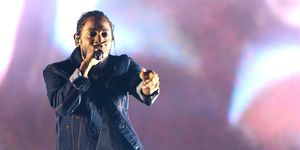 The video's directed by Dave Meyers and The Little Homies, who also directed his "HUMBLE." video. This is the fourth track from Kendrick's new album "DAMN." to get a music video, following "HUMBLE.", "DNA.", and "ELEMENT." It's just as cinematic and tonally rich as we've come to expect from this team, and features Kendrick and RiRi caught up in a bunch of extremely dangerous but visually stunning situations, including a car crash, a street fight, and dangling from a very, very, very high rooftop.

It's lit, basically is what we're saying, and if you need to watch this a few times on a loop to gear yourself up for the weekend, no judgement.