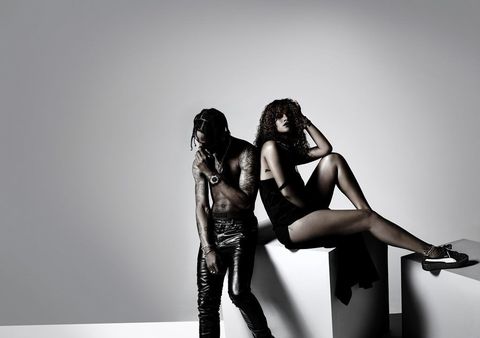 Update, 9/15: What are you more excited about: A Puma creeper designed by Rihanna going on sale today or the Rihanna/Travis Scott plot thickening like a béchamel left on the heat for seven hours? ¯\_(ツ)_/¯ WHO CAN CHOOSE?

Released as the Puma by Rihanna Collection under Rihanna's Fenty label, the first release reimagines the classic Puma Suede as a flatform to wear with a slip dress, black lipstick, and your maybe-boyfriend. Look—Rihanna's excited too!

Starring in a campaign together is like the new third date, right? Pick up a pair of creepers online now.

Update, 12/16: There's no use keeping your emotions in check now—Rihanna has officially signed on as creative director of Puma. As part of a multi-year deal, she'll oversee the women's line "to design and customize classic Puma styles as well as create new styles to add to the Puma product portfolio," the activewear firm said in a statement Tuesday.

Fingers crossed it won't be long before we spy a pair of reworked Whirlwinds on her Instagram—according to WWD, she hit the ground running, flying to Germany on Monday to hold her first design meeting.

According to the New York Daily News, Rihanna is in talks to ink a seven-figure deal with the sportswear brand, which could include designing shoes, "helping with pants and tops," and agreeing to only wear athletic footwear decorated with a leaping mountain lion logo.

If the Barbadian fashion darling—who has partnerships with River Island, Armani, and MAC under her belt—scrawls her name on the dotted line, she could also be signing on to work with Solange Knowles: The newlywed became art director of the brand in February 2014, shortly after which she turned out a line of artsy pastel trainers.

Can Rihange/Solanna come up with sneakers to end Adidas' reign of fash-collab dominance? Our take: If they can't do it, nobody can.

Chelsea Peng I'm Chelsea Peng, the assistant editor at MarieClaire.com.
This content is created and maintained by a third party, and imported onto this page to help users provide their email addresses. You may be able to find more information about this and similar content at piano.io
Advertisement - Continue Reading Below
More From Fashion
Gigi Hadid Makes Her Triumphant Runway Return
Once a Classic, Always a Classic
Advertisement - Continue Reading Below
The Best Looks of Milan Fashion Week Fall 2021
What to Wear to Meet Queen E, According to Celebs
The Fall 2021 Shoes Everyone Will Be All Over
5 Bold Colors That'll Be Everywhere This Spring
Created for From Marie Claire for Created by Marie Claire for
Luxury Stores
The Top Fall 2021 Handbag Trends
The New NYFW Jewelry Collab You Should Know About
10 Ways to Wear Your Favorite Oversized Sweater
Our Fashion Editors' Favorite Patterned Tights