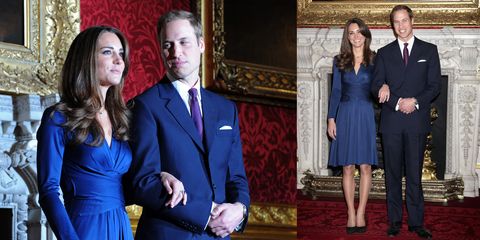 Fans of Kate Middleton's impeccable style will be overjoyed to hear that her iconic engagement dress is now available to buy in a selection of colors.

Prince William and Kate Middleton announced their engagement back in November 2010, and Middleton's Sapphire Issa London wrap dress caught everyone's attention. In fact, the dress sold out almost immediately; the designer responsible for the iconic look couldn't keep up with the immense demand.

As Harper's BAZAAR reported, "the dress became an overnight sensation and sold out from British retailer Harvey Nichols, and resulted in the brand's designs being sold-out in more than 43 countries." But as Issa's creative director Daniella Helayel revealed, the company simply couldn't finance the production of enough dresses to meet the unprecedented demand, and the label ultimately closed.

Cut to 2018, and Issa has relaunched at British store House of Fraser, and will now be selling the the Kate Tie Wrap dress in several colors. Plus, the new design is significantly cheaper than the original—while the first Issa wrap dress retailed for around $600, the new Kate Tie Wrap is a fraction of the price at $140.

Issa's new Kate Tie Wrap dress is currently available in an emerald green, with more colors to follow. There is also a redesigned version of the dress, which features a fitted skirt, available in black, royal blue, and red.

And luckily, House of Fraser will deliver internationally for anyone desperate to get their own version of the Duchess' classic gown before it sells out again.

Related Story
Shop Every One of Meghan Markle's Best Looks
This content is created and maintained by a third party, and imported onto this page to help users provide their email addresses. You may be able to find more information about this and similar content at piano.io
Advertisement - Continue Reading Below
More From The Ultimate Guide to the Royal Family
Princess Beatrice Has Given Birth to a Baby Girl
How Meghan & Harry Spent Their 2-Year Anniversary
Advertisement - Continue Reading Below
Charlotte Has Two Major Milestones Coming Up
Kate Made a Very Common Shoe Shopping Mistake
The Queen Is Lawyering Up, Apparently
Harry & Meghan Are Still Close to the Queen, TYVM
Archie Inspired Harry and Meghan to Take a Stand
Harry & Meghan Had a Hard Time Leaving Royal Life
See Will & Kate's Note About Prince Philip's Death
Kate Refused to Let George Pet a Marsupial in 2014