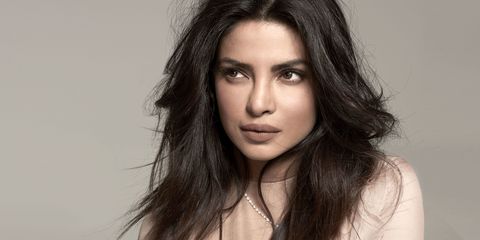 "I never plan too far ahead," says Priyanka Chopra. "Man proposes, God disposes. Why waste my time?" Wise words, considering the 34-year-old actress's path to Hollywood was anything but conventional.

Born in Jamshedpur, India, she stumbled into acting after her mother submitted headshots—which Chopra originally took for an aeronautical engineering program—to the Miss India national beauty contest, and she went on to win the Miss World pageant the following year. After that, the movie offers poured in (she's now been in more than 50). When she landed the role of FBI recruit Alex Parrish on ABC's thriller Quantico, she became the first Indian actress to headline a prime-time network show. "It's a lot of physical work," she says. "But the real challenge was convincing America that I could play an American girl."

"I never plan too far ahead. Man proposes, God disposes. Why waste my time?"

Mission accomplished. Next year, she'll costar in the highly anticipated Baywatch reboot—about as all-American as it gets. Her character is equal parts Indian flash and American sizzle. "She's a billionaire bitch on a beach wearing couture," she says, laughing. "I want to be her."

In reality, Chopra—named one of Time's 100 Most Influential People this year—rocks a no-frills uniform of jeans, jackets, and boots, though she harbors a penchant for high fashion ("I will die in Chanel!"). With Quantico's second season airing this fall, she's eyeing her next project carefully. On that fan-led effort to cast her as the first female Bond? "Depends on the part," she says. "She'd definitely have to be called Jane."

Ideal Weekend: "Going to the beach and binge-watching a TV show while eating pizza."

Finishing Touches: "My evil-eye bracelet with a mantra on it, and a necklace that belonged to my dad."

Must-Have: "My Valentino camo-print backpack; I carry my whole life in it. If I get on a plane and lose my luggage, I can survive with just my backpack."

Advertisement - Continue Reading Below
More From Fashion
What the Founder of Lingua Franca Wears to Work
The Best Grammys After-Party Outfits
Advertisement - Continue Reading Below
The Spring Trends That'll Shake Up Your Wardrobe
Behold: The Sexiest Looks at the 2020 Grammys
The Best Red Carpet Looks at the 2020 Grammys
Shop Kate Middleton's Personalized Charm Necklace
PSA: Anthropologie Is Having a Sale All Weekend
Treat Yourself to These Pretty Lingerie Pieces
Doutzen Kroes Goes Behind the Scenes at Dior
Louis Vuitton Unveils Its Spooky Pre-Fall Lookbook