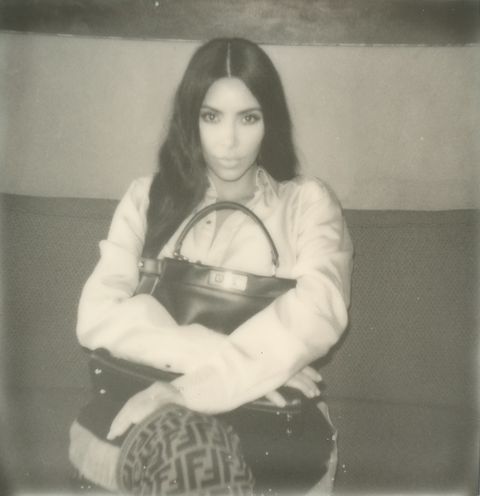 Perhaps you want to invest in a future family heirloom? Kim Kardashian West has a suggestion: the Fendi Peekaboo bag. Kim, her daughter North, and her mother, Kris Jenner, are featured in the fashion house's new campaign, #MeAndMyPeekaboo, celebrating the 10th anniversary of the iconic bag and highlighting the way the purse can be passed between mothers, daughters, and sisters.

"[The three women] star in candid and spontaneous shots, which instead of focusing on their public images, capture their most authentic and intimate personality,” Fendi reps said in a press release. The grainy film, Kim’s barely-there makeup, North’s perch on Kim’s lap, Kris’ soft gaze—it's beautifully intimate, a glimpse into both Kris and Kim’s identities as mothers. The tone of the photographs rings true to Fendi's intended message: The Peekaboo is a treasure created to be passed on to a daughter, after being worn and weathered by a mother.

Kim tweeted about the new project today, writing, "so major to be in a campaign with my mom and daughter," and quoting Creative Director of Accessories, Silvia Fendi, about why the reality stars were chosen: "they are all three of them very strong women, with strong personalities. It’s an iconic family."

“The idea was to expand the concept of family, as it’s part of our history, and we wanted other families of women. In the case of the Kardashians, they are all three of them very strong women, with strong personalities. It’s an iconic family" - Silvia Venturini Fendi

Fendi Campaign coming soon! So major to be in a campaign with my mom and daughter 💕 #FendiFamily #MeAndMyPeekaboo

The first phase of the #MeAndMyPeekaboo campaign (released in April) featured a series of short videos of Silvia Fendi and her two daughters, Delfina Delettrez and Leonetta Luciana Fendi, in which they praise each other and explain their relationships with the Peekaboo bag. The video opens with Leonetta and Delfina seated at a table, clad in Fendi clothing: “My mum is unstoppable,” Leonetta says.

The second phase, starring Kim, Kris, and North, has the same feminine, familial tone of the first. Starting on July 11, Fendi will begin releasing images and short videos of the trio on their social networks. And, despite the fact that we've already witnessed so much of these women's lives on television, the ads give viewers the sense that they're privy to intimate scenes of motherhood and family.

Each of the campaign's short videos will feature Kanye West’s 2008 song Love Lockdown as its soundtrack. Fendi says the videos "develop a narrative, highlighting the special, irreplaceable and strong bond between outstanding women.”

Related Story
Kanye's New Yeezy Campaign Is Unmissable
t
This content is created and maintained by a third party, and imported onto this page to help users provide their email addresses. You may be able to find more information about this and similar content at piano.io
Advertisement - Continue Reading Below
More From Fashion
Rain Jackets That'll Make You Excited for Storms
The Best Swimsuits, According to 100s of Reviews
Advertisement - Continue Reading Below
Chunky Sneakers We Can't Resist
Floral Dresses You'll Wear on Repeat
Let Amazon Help You Figure Out Your Work Wardrobe
In Partnership with Amazon Fashion In Partnership with Amazon Fashion In Partnership with
Amazon Fashion
The Evolution of Royal Engagement Rings
Summer Hats to Fall in Love With
Celebs Wore THAT to the Airport?!
How Princess Eugenie's Wedding Dress Compares
Meghan Markle's Life in Photos