Today's Top Stories
1
The Best Red Carpet Looks at the 2021 Emmys
2
These Goats Could Help Save California
3
Tarana Burke on the Past and Future of #MeToo
4
Kate Middleton Shares Prince Louis's First Words
5
Is Olive Oil the Key to Ridiculously Good Skin?
Courtesy

Like every other MTV fan of the early 2000s, I watched Laguna Beach and its equally addictive spinoffs: The Hills and The City. When all the shows ended and Lauren Conrad, Whitney Port, and the crew moved on with their lives off-screen, I did too—not thinking one day I would meet any of the cast members. Fast forward to eight years since the end of The Hills (though there are rumors of a reboot) and there I am sitting on a couch in the Kohl's showroom, chatting with Conrad. She's been designing for the retailer since 2009 and this month launched new denim styles, like the super skinny; her weekend collection debuts in September.

In addition to her booming fashion line, LC Lauren Conrad, the OG reality TV queen has also authored two books: L.A. Candy, a coming-of-age in Hollywood novel, and The Fame Game, another guilty-pleasure teen read. While her career and personal life have changed drastically since her intern days at Teen Vogue (she now has a 1-year-old son, Liam, with husband William Tell), Conrad has seemingly managed to stay cool, composed, and nice.

We chatted briefly about my recording device (she thought it resembled these fans) and then we launched into the real topic: the new pieces in her clothing line. Before I spoil the entire conversation though, read Conrad's own feelings on her Kohl's line, below, and get some free styling advice while you're at it.

"We have the super skinny jean, which is very stretchy, so it's almost jegging like—that’s my go-to. You can wear it on the plane and it maintains its shape. It won’t become baggy after a day. You can wear it with a blazer and flats into the office or with heels and a cute top at night."

On Recognizing Her Designs on Strangers

"I don’t ever say anything to them, but if I’m with a friend or someone I will point it out. We were out last weekend at the Orange County Fair and this woman in front of us was wearing a shirt that just came out from the line. I was like ‘look, look, look’ I don’t think that ever stops being exciting, to see your own stuff on people. Sometimes if the person comes up to me about my clothes, I’ll quiz them, like ‘what do you like?’ ‘what do you need?’ I want customer feedback."

The Pieces She Owns in Multiple

"White tees, button downs, black blazers, anything that is classic I start to collect. Jeans.''

The Inspiration Behind Her New Weekend Collection

"We always look to our customer, like, what is she doing in her life? In the last year, since I’ve become a mom, I work from home and you don’t need to put on heels and a blazer. But, I also don’t want to wear my pajamas around the house all day. Sometimes, you want to feel comfortable in your home, but look put together. This collection doesn’t have to be strictly for the weekend. The pieces are versatile enough that you can wear them out while still having that relaxed vibe." 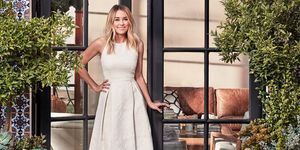 Take a Tour of Lauren Conrad's Home
This content is created and maintained by a third party, and imported onto this page to help users provide their email addresses. You may be able to find more information about this and similar content at piano.io
Advertisement - Continue Reading Below
More From Fashion
Anya Taylor-Joy Was a High-Fashion Princess
Kathryn Hahn Is Dressed to Perfection
Advertisement - Continue Reading Below
The Best Red Carpet Looks at the 2021 Emmys
Dior Photography Award Winner Shares Inspirations
We're Living for This Blast-From-the-Past Fashion
The Leggings You Want When the Weather Gets Brisk
Emily Blunt Is a Modern-Day Ziegfeld Girl
AOC Wore a Dress With a Stark Message
Ella Emhoff Is Fashion's Chicest It Girl
Serena Williams Glows In a Bodysuit and Feathers