Tonight, in London, Prince William and Kate Middleton are attending the 2018 Tusk Conservation Awards together. The special ceremony celebrates individuals who have contributed to environmental efforts and conservation across Africa. One of the three awards is even named after Prince William, which the future King of England will present himself.

For the formal event, Prince William chose a black tux. His wife, meanwhile, wore an aqua green Jenny Packham dress, which she recycled from the 2012 Olympic gala. It featured lace cap sleeves with a beaded green belt and looked absolutely breathtaking. She styled the outfit with an embroidered clutch, Jimmy Choo heels, and the Queen's diamond chandelier earrings.

While Prince William has attended the annual award event for the past few years, this is only Kate's second time at the event. The last time she attended the Tusk Conservation Awards was in 2013, where she wore a sequined Jenny Packham dress and Jimmy Choo platform heels. That was the Duchess of Cambridge's first official engagement since giving birth to Prince George. This time around, however, the mother of three has already settled nicely back into her royal duties. (Kate came back from maternity leave last month to visit the Sayers Croft Forest School and Wildlife Garden.)

Although both gowns are from the British label, they were different in terms of fabric and color. It seems this year, Kate preferred a brighter teal look. 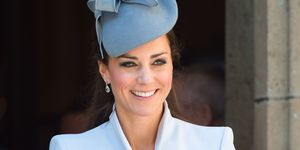 14 Things You Never Knew About Kate Middleton
This content is created and maintained by a third party, and imported onto this page to help users provide their email addresses. You may be able to find more information about this and similar content at piano.io
Advertisement - Continue Reading Below
More From Royal Family Fashion Guide
For Prince George Turning 8 Is a Fashion Milestone
Meghan's Sunglasses Are On Sale for Prime Day
Advertisement - Continue Reading Below
The Meaning Behind the Royal Family Member's Names
Meghan Wore a Meaningful Necklace for Vax Live
Meghan Markle Wore Carolina Herrera for Vax Live
Kate Middleton's Nod to Diana at Philip's Funeral
The Most Genius Royal Fashion Hacks of All Time
Pippa Middleton Goes for Stylish Stroll In London
Meghan Markle Wears Armani for Her Oprah Interview
Shop Meghan's Stunning $30 Summer Dress