It was a big night for the Victoria's Secret models, including power duo Bella and Gigi Hadid. After walking in the show together in 2016, the two sisters again shared the same runway last night in New York City. Bella, who walked her third VSFS, modeled a blue lingerie set with feathery wings and then a sportier black ensemble while her beau The Weeknd cheered her on from the front row.

While the show gave us plenty of lingerie inspo, post-runway came the sparkly and sheer gowns. For the after-party, Bella wore a plunging neckline dress by Julien Macdonald. It dipped low in the back and the metallic shimmery dress was completely see through. Since it was freezing at night, as Bella left the after-party, The Weeknd sweetly took off his jacket and draped it over her shoulders to shield her from the cold.

As they got into their car, it appeared the two had their own late-night plans because then they were spotted near Artichoke Basille's Pizza. The model changed into a second, even more naked look. For her second outfit, Bella wore a nude bodycon minidress with high-top sneakers—a casual change from her silver pumps on the pink carpet. She ditched the bra and seemed to brave the cold once again with The Weeknd by her side. 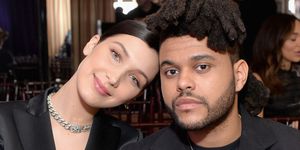 Bella and The Weeknd's Dating Timeline
All the Looks From the 2018 VSFS
A Complete History of the VSFS
This content is created and maintained by a third party, and imported onto this page to help users provide their email addresses. You may be able to find more information about this and similar content at piano.io
Advertisement - Continue Reading Below
More From Fashion
Hats That Will Make a Statement—In a Good Way
The Most Exciting Jewelry Trends for Fall 2021
Advertisement - Continue Reading Below
Maxi Dresses That Work for Every Occassion
The 100 Best Shopping Sites to Browse Through
The Perfect Vests for Layering
How to Make White Sneakers Look Brand New
Colors of Fall You're About to See Everywhere
Madewell Is Selling Their Old Jeans on ThredUP
Jean Jackets You'll Live In
Wide-Leg Jeans Are About to Be Your Favorite Denim