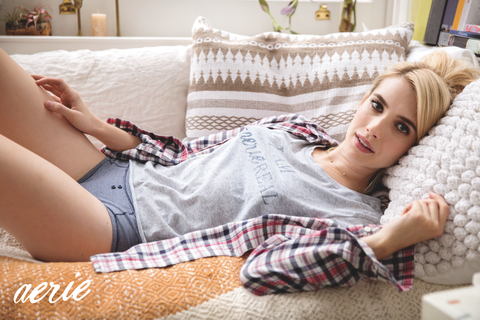 For a long time, Photoshop has seemed like a fact of life—especially in campaign ads designed to sell not only a product but also an "ideal." Aerie's been pleasantly pushing that boundary, choosing to display unretouched models in their underwear shots—and now they're adding celebrities to the mix to make what they hope is an even bigger body-positive impact.

Enter Aerie's #AerieREAL campaign, which features Emma Roberts as its new face. The just-released photos are the first in a planned series that will feature celebs in Photoshop-free ads.

"Partnering with Aerie was a natural fit for me because #AerieREAL is a message I personally identify with, particularly being in an industry that is quick to judge flaws," Roberts said in a press release. "I feel so honored to be part of a movement that reassures women that real doesn't mean flawed—real is sexy, real is cool."

Roberts' pictures will be featured in stores starting September 3—but you can see a sneak peek here:

While Roberts looks stunning, it would be powerful to see the remaining ads in this campaign feature women of all shapes, colors, and sizes—nothing could get more real than that.

This content is created and maintained by a third party, and imported onto this page to help users provide their email addresses. You may be able to find more information about this and similar content at piano.io
Advertisement - Continue Reading Below
More From Fashion
You'll Wear a Burberry Trench Forever
Key Fashion Trends to Know for Fall 2020
Advertisement - Continue Reading Below
The Best Luxury Handbags for Fall 2020
Winter-Appropriate Dresses Do Exist—Here's Proof
Shop Katie Holmes' Ulla Johnson Floral Dress
The Best Workout Clothes You Can Find on Amazon
Spring 2021 Handbag Trends You'll Wanna Grab Now
10 Everyday Winter Outfits Anyone Can Pull Off
The Oversized Blazer Is a Year-Round Essential
That Viral Amazon Jacket Just Got a Major Glow-Up