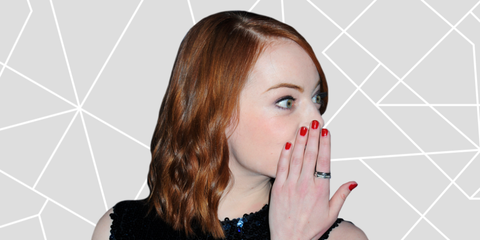 You wouldn't know it because you'd be gobsmacked by the geometric shapes and Crayola-bright stones, but the jewelry Jennifer Lawrence, Emma Stone, and Selena Gomez have all worn aren't ordinary rings and earrings at all—they're inch-tall feats of engineering.

With an uncommon level of thought (hidden clasps, interior pave) and Transformer capabilities (double-sided pendants you don't need to take off to flip around), Melissa Kaye's miniature artworks are both cool *and* smart AF. Here, the designer talks the intersection of form and function, failure, and caring about details nobody ever sees.

Marie Claire: How did you go from studying at MIT to designing jewelry?

Melissa Kaye: I did my undergraduate degree there in computer science and engineering. I also have a master's degree in computational finance from Carnegie Mellon. So really, I was a quant geek. I worked in finance for Goldman Sachs for 10 years as a quantitative strategist doing very technical and quantitative work, but I decided to take a new direction and do something different. I've had a lifelong interest in jewelry. In fact, I was over at my parents' house recently and my mother took out a pair of earrings I made for her when I was 11. I have to tell you, though, they were hideously bad. I ended up taking a couple of classes at FIT to see if I was really serious about pursuing this. Ultimately, I decided to enroll in their two-year jewelry design program. Soon after I finished that program, where I was doing both design and bench work, I launched the collection. Starting out, it was really more word of mouth, private sales, friends telling friends, things like that. I then tried to launch more of the wholesale end last year.

"You could say you're left-brained or right-brained, but we've all got both—it's just a question of how to leverage them."

MC: Your career is really interesting because people think they're either left-brained person or right-brained, but what you do relies on both.

MK: You could say you're left-brained or right-brained, but we've all got both—it's just a question of how to leverage them. One of the things I love about jewelry design is exactly that. My starting point is typically "How is this thing going to work?" Of course I want it to be pretty, but at the end of the day, if it doesn't work, it doesn't work. Because I have more of a engineering background, I like things to transform or work in interesting ways. First and foremost, it has to fit well and feel good when you're wearing it. But also, you can have that extra element of surprise, like "If I wear this ring this way, it looks one way, and if I wear it the other way, it looks different."

MC: How else do you apply math to your jewelry?

MK: It's a mindset more than anything. A lot of my pieces are classic geometric shapes, but the question is how do you take those and add a modern edge? The other is about the design philosophy. Function is not an afterthought—it is the design. There's an engineering aspect with reversible pieces, pieces that have hidden closures so you have a seamless pattern in the piece. Also, looking at a design style and tessellated patterns or plays on symmetry and asymmetry—that's in basically every piece. When actually making the pieces, jewelry design is very technical. For example, making sure that a pattern on a ring is going to cover the entire circumference of a finger. On top of it, you've got this very creative aspect as well, because you want to make something beautiful that has personal meaning to the person who is going to be wearing it. It's the best of both worlds.

MC: Is there a piece in particular that exemplifies your process?

MK: My physically smallest piece is a trio of marquis [diamonds] that make a circle. I took that little ornament and made a ring that has that repeating ornament and named it after my niece Hazel, who's 4 years old. Then I said, "What if I repeated it, but every one of those open cells was actually a marquis diamond?" You have pieces that will work, sometimes, the first time. You have an idea, you make the piece, boom, it works. Then you have other pieces that take two, three, four, five tries before you get it right. It could be a visual thing, like you wanted to change something about the way it looked. Or it could be like that it wasn't structurally sound. Just like an engineer, there are different iterations in the process before you come to a final model you're happy to use.

The evolution of the Hazel ornament
Courtesy of Melissa Kaye Jewelry

MC: One way I've heard your pieces described is "miniature works of art" because of the level of detail and the finishing. Why is that a priority for you, making sure every inch is designed and deliberate?

MK: I have pieces that I've made, more than one, that for whatever weren't structurally working. Everyone said to me, "Stick a bar on it." And I want to cringe, because no, I can't just stick a bar on it. I shouldn't say it offends me, but for lack of a better word, it offends me. It takes away from the integrity of the design. If I have to stick a bar on it, that's not terribly thoughtful. For example, if we have a ring that has five lines of diamonds and an airspace between the lines, someone will tell me to stick a bar across it, and that it'll be on the other side so no one will see it. But I know it's there. I can't just do that. The function has to be part of the design—it can't be an afterthought. I have abandoned so many design ideas because I will not let the function be an afterthought.

This content is created and maintained by a third party, and imported onto this page to help users provide their email addresses. You may be able to find more information about this and similar content at piano.io
Advertisement - Continue Reading Below
More From Fashion
The 100 Best Shopping Sites to Browse Through
The Perfect Vests for Layering
Advertisement - Continue Reading Below
How to Make White Sneakers Look Brand New
Colors of Fall You're About to See Everywhere
Madewell Is Selling Their Old Jeans on ThredUP
Jean Jackets You'll Live In
Wide-Leg Jeans Are About to Be Your Favorite Denim
Small Business Spotlight: Almost On Time
Your Go-To List of the Coolest White Sneakers Ever
How to Dress for All Those Rescheduled Weddings