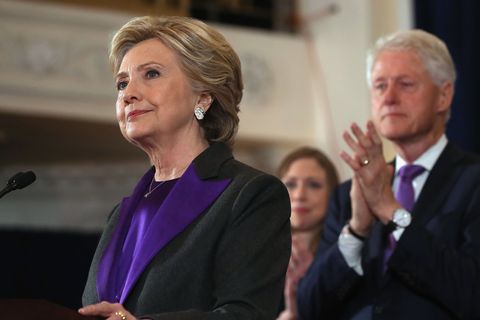 Women across the United States wore white pantsuits to vote on Tuesday, a nod to suffragettes as well as Hillary Clinton, who's spent this entire election donning her signature look. For the most part, the democratic candidate rocked red, white, and blue (#USA!), but she mixed things up during Wednesday morning's concession speech and wore a Ralph Lauren suit with purple lapels and a matching purple blouse.

Why? Because blue (the color of democrats) and red (the color of republicans) mixed together makes purple. Hillary was sending a sartorial plea for unity, and while it's hard to stay positive, let's take up the mantle and hope that this election will prove that we are, in fact, #StrongerTogether.

H/T to The Hollywood Reporter.

Mehera Bonner Contributor Mehera Bonner is a news writer who focuses on celebrities and royals—follow her on Instagram.
Advertisement - Continue Reading Below
More From Fashion
The Jewelry Trends You'll See Everywhere in 2020
How to Watch Loewe's Fall 2020 Runway Show
Advertisement - Continue Reading Below
All the Runway Looks From Lanvin's Fall 2020 Show
Every Look From Chloé's Fall 2020 Collection
Blue Jean Baby: High-End Denim Worth the Hype
Paris Fashion Week's Street Style Is Très Chic
Chic Rain Coats to Wear When It's Gross Outside
The Evolution of the Little Black Dress
The Best Fall 2020 Runway Looks From PFW So Far
All the Looks From Saint Laurent's Fall 2020 Show