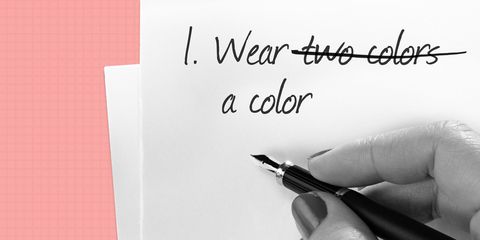 As January 1 nears and we remember all that we have (again) failed to accomplish, find solace in the fact that the worse is yet to come, and that calamity or the specter of death might give you a renewed sense of purpose. (Yeah!) But until the end actually nears, why not pass the time with some self-improvement? Just some mild sprucing up, mind you, because you'll need your strength soon. And that's the true spirit of New Year's: Just keep moving, even if it's only dragging yourself a millimeter closer to your demise.

1. Toss any knickers past the period-underwear mark

We're not talking old, per se, because Aerie really does make decent briefs, and as long as they're clean and still fit, they're fine. (We're not talking 24/7 matching sets either, because, come on, fam—that's asking way too much.) But ripped waistbands, stretched-out leg openings, and more holes than Donald Trump's foreign policy? You're better than that.

Once is all we ask, though they say it takes 10 or more to get your kids to eat rutabaga or whatever. IDK. But I do know that I used to have a vendetta against orange so intense you would've thought a clementine had stolen my boyfriend, but then I got a fluoro Cambridge Satchel (remember those?), and my sartorial universe opened up like an Hermès store.

3. Sort out your closet

Meanwhile on an #MRShoesday balllot near you... click the link in bio with your pinky toenail to read @leandramedine's closet cleaning tips.

And do your best to maintain it, even though your mom's in the background right now snorting.

4. See how long you can go without buying anything

This will vary by person, but the lesson is the same: You're probably not as good at shopping as you think, which is how you've ended up with bales of useless rags you don't even know how to wear. (That and American consumerism.) With this easy exercise, buying things becomes more deliberate instead of a relentless hunt where all you end up with is waste and credit-card debt.

5. But please get yourself proper winter clothes

A few more sizes of the Lassie Coat are #BackInStock #QuickQuick 🏃🏼💃🏼❤️

At one point in time, I would have said 'tis better to die than to wear a puffer coat. But then I thought, "Hmm. I really need to hang around long enough to amass a wicked vintage Courrèges collection. Oh—and to see my enemies fall." So make it a priority to acquire a real coat and shoes with traction.