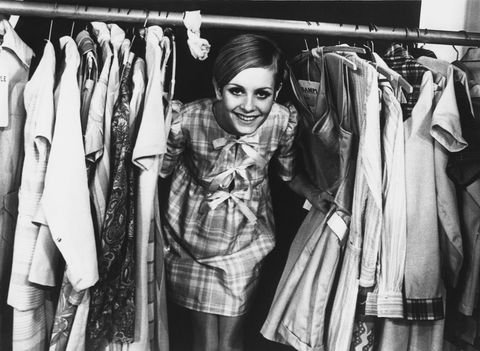 1. Militant Kondo-ing is a fallacy

Worry less about kicking anything that doesn't elicit smiles and sunshine to the curb for Goodwill to pick up. People change. Their ideas of happiness change. And even that fugly green Lurex mock-neck must have once brought you joy—why else would you have bought it?—what's to say it can't again? The worst that can happen is that, in your tunnel-visioned overemphasis on letting go, you discard something you might one day remember fondly and regret not having. (Like a pair of beaded jeans Sandy Liang could have made. 😑) So along those lines, a controversial stance: Keep more. In other words, that's right—I SUPPORT LIGHT HOARDING.

Meanwhile on an #MRShoesday balllot near you... click the link in bio with your pinky toenail to read @leandramedine's closet cleaning tips.

2. Because you must fight for style

And the more resources you've got, the more you will learn. Contrary to, like, everybody but Thomas F*ckin' A. Edison, you cannot wait for the defibrillator paddle of inspiration to shock you—you must (mostly) work for it. That might look like trying on outfit ideas for the week every Sunday and documenting the successful ones in a tiny Smythson. More realistically, that might look like a change in how you display the objects of shame/consternation from Point No. 1: Hang them front and center and let them serve as a reminder of your past failure and poor judgment that could turn out to be sound judgment if you ever sort the damn thing out. See it. Think it. Achieve it. (That would do so well on Etsy. Dibs.)

3. But also allow for chance

Next up in this series of contradictions: the argument against arranging your wardrobe by color or style or season. Too narrow, especially now that those dams have been busted wide open by a fashion industry that lives for "buy now, wear whenever." Instead, leave it up to entropy, which is sort of like letting the universe choose your clothes except not, because you still have to recognize those patterns yourself. When you open yourself to probability or luck, as some might call it, you might see that this brocade looks kind of cool with that brocade or that lilac really can go with trousers the color of an old football.

4. But also not so much so that you've no idea what you own

Think of your closet as the new Mansur Gavriel boutique or Colette, where there's only one of everything, and you're not allowed to pick it up. (Because these are cool stores, not regular stores.) Keeping your stock out in the open helps you remember what you've got at a glance, which, in turn, keeps your mental catalogue fresh. Tangential: Decision fatigue, schmecision schmatigue—personal style is a perfectly good waste of brain space, no matter what Mark Zuckerberg says.

5. No more The Chair

Chelsea Peng I'm Chelsea Peng, the assistant editor at MarieClaire.com.
Advertisement - Continue Reading Below
More From Fashion
A Podiatrist Shares Tips for Buying Comfy Heels
The Most Daring, Sheer Celebrity Outfits Ever
Advertisement - Continue Reading Below
Free People's Jeans Sale Is Giving Me Life
The Item I Wear to Death: My DVF Camel Coat
The Best Pairs of Grown-Up Denim Shorts Out There
Stock Up on Cute, Flirty Summer Dresses
Cartier Women's Initiative Announces Its Finalists
What Marie Claire Editors Wore to Get Their Jobs
Is the Next Big Wedding Trend Reversible Gowns?
Our Favorite Throwback "It-Bags"