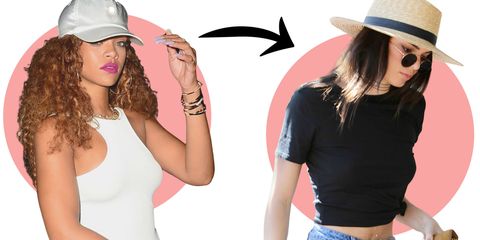 But if you're planning on simply dusting off last year's duds, you've got a few 2016 updates to contend with. Here, three stealth headwear swaps that'll blow your lid. Sorry, that was bad—told you the dad trend was getting to me.

A wider brim = more sun protection but also more mystery and glamour and allure. Or, at the very least, it makes it easier to pretend you're not sleeping.

The Dad Hat for a Boater
Courtesy, design by Kevin Peralta

This one's more of an occasional change-up, because, in the end, there really is nothing better than some random branded ball cap for covering up your morning-after roots. But still—you've probably been wearing one all winter thanks to uber-cool design collective Vetements, so maybe try something a bit fresher for the season. Enter the boater, which might be a little costume-y but also a lot cute.

Why not switch out one cliché for another? (Pretty much no one except Rihanna could do the bucket anyway, if we're being honest with ourselves.) This time, though, the fedora is straying far from its sad Rat Pack wannabe rep and straight into weirdly, actually cool territory, thanks to Karl Lagerfeld and one momentous night in Cuba.