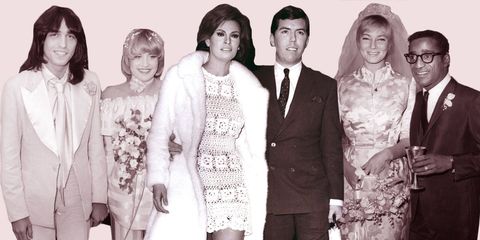 As subway ads have pointed out before, love makes us do crazy things like agonize over a dress we'll wear only once—well, not everybody, as these 30 celebrities prove. Keep clicking for minis, jumpsuits, trousers, and, yes, even black.

Marrying Rupert Murdoch in 2016. Blue was clearly the theme.

Marrying Michael Farmer in 1931. Is that velvet?

Marrying Alan Ferguson in 2014. The whole affair was a goddamn dream.

Marrying Philippe Lemaire in 1953. Into the wide lapel, even more into everybody's eyes in this.

Marrying Richard Burton in 1964. Copying that epic hair for my first marriage.

Marrying Paul McCartney in 2011. Would sell a lot of picture frames.

Marrying Jack Haley Jr. in 1986. Fashioning a flower choker as we speak.

Marrying Roman Polanski in 1968. A tragic story, but a beautiful moment here.

Marrying Lee Majors in 1973. Such great hair on this family.

Marrying Paul McCartney in 1969. This is so British, down to the umbrella.

Marrying Vincente Minneli in 1945. The high collar says "I'm modest!" but the Instagram you'll post of this will say "I want somebody to give me forehead kisses."

Marrying Sammy Davis Jr. in 1960. You know someone would give their left elbow for this at a vintage store.

Marrying Michael Witney in 1977. Into the garden-party vibe.

Marrying James Righton in 2013. No better poster girl for re-wearing whatever you want and not GAF.

Marrying Thomas Mars in 2011. When Alaïa says you're "too old" to wear long, you go "LOL, okay, but I would deck anyone else who said that to me."

Marrying Patrick Curtis in 1967. Flying in your wedding dress: the ultimate.

Marrying Roger Smith in 1967. Mad respect for the no-pants look.

Marrying Winston Marshall in 2016. Worth every last cent.

Next
Wedding Gowns for 10 Engaged Celebrities 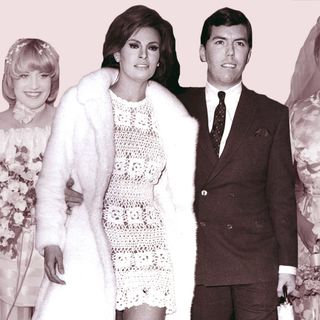