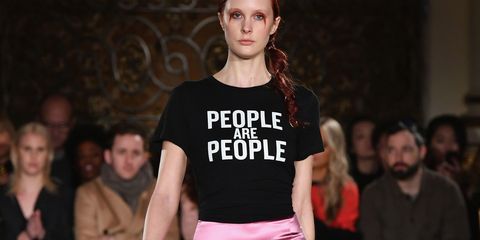 In Donald Trump's home state, designers debuting their fall/winter collections at NYFW took the protests from the streets to the runways with political messages adorning their designs and subtler hints through decor and music (Raf Simon's first show for Calvin Klein was set to David Bowie's "This is Not America"). Follow along below as we update all the not-to-be-missed political moments of the week.

Siriano echoed the sentiment with a tee-shirt that simply read "People are People." Proceeds from the "see now, buy now" shirt benefit the ACLU.

A subtle political statement, but one that wasn't missed by anyone watching: the moment when Gigi Hadid led a group of models down the Tommy Hilfiger runway wearing white bandannas around their wrists. On a closer look, the scarves are enscribed with the hashtag #TiedTogether, part of the Business of Fashion initiative that encouraged designers to wear and promote the white scarves as symbols of unity.

The Mexican designer behind rising fashion brand LRS Studio, Raoul Soulis, sent  models down the runway wearing white undies that read, "F*ck your wall" and "No ban, no wall!!!"

The Tome designers Instagrammed themselves wearing tee-shirts in support of Planned Parenthood and the Women's March after sending a model down the runway with a tongue-in-cheek jacket that broke down the "advantages" of being a female artist (see the close-up version here). The art comes from Guerilla Girls, a group of female artists and performers who fight discrimination through the arts.

Models at Public School wore slogans like "Feminist AF" and an ongoing message from seasons past, "We Need Leaders."

The designers also put a spin on Trump's signature "Make America Great Again" hats with a nod to the inclusive, immigrant-friendly history of New York City.

A #bts shot from the most diverse show I've ever witnessed. @gypsysport #gypsysport #nyfw2017 - fashion sure is getting weird. See more in my #instastories

Gypsy Sport consistently taps a diverse range of models for its shows and this fashion week, it took advantage of the moment to make a statement about compassion for refugees with tents set along the runways and a musical performance by a family of drummers who play on DIY instruments in the subway. Designer Rio Uribe also delivered an impassioned, politically charged speech about refugees before the show.

The finale of @rafsimons' debut collection for @calvinklein. What do you think? #calvinklein #rafsimons #NYFW

Models at Raf Simon's highly anticipated first collection for Calvin Klein walked to a super political anthem, David Bowie's "This is Not America." The collection itself was described as an amalgamation of American symbolism, from Western cowboy collars to parkas lined with handmade quilting details. Calvin Klein attendees also received #TiedTogether bandannas with their invites.

The duo behind Cushnie et Ochs set a song with empowering lyrics such as "the future is female" as the soundtrack to their runway show.

Even the show notes this season got political: Milly creative director Michelle Smith wrote up an emotional note about her uncertainty and sense of defeat following the election. Attendees also received sweatshirts reading "Steineim AF" as a tribute to the feminist icon and "Unbreakable."

HAPPY NY FASHION WEEK! I will be repping this pink pin all week @plannedparenthood #IStandWithPP 💗💓💕💞🌸🌷

Everyone who attended the Adam Selman show was given a "Fashion Stands with Planned Parenthood" pin.

And notable designers like Diane von Furstenberg took up the cause, too.

Nepalese designer Prabal Gurung hopped on the slogan tee train, too, with a line of different messages, from "Stronger than Fear" and "Femininity with a Bite" empowerment phrases to #NoBanNoWall support with a succinct  "I Am an Immigrant" tee.

It was also notable that the designer chose to cast plus-size models in this show that was all about empowerment and inclusivity.

Backstage at Zadig & Voltaire's fall show, models mugged with logo tees that read "Girls Can Do Anything."

Muslim designer Hasibuan went viral last fashion week for her show that saw all models wearing custom hijabs with her gorgeous designs, and this year she scouted models from all over the world to walk the runway (including immigrants and first- and second-generation models).

CFDA/Vogue Fashion Fund finalist Chloe Gosselin and all the models at her show wore buttons in support of Planned Parenthood at her presentation.