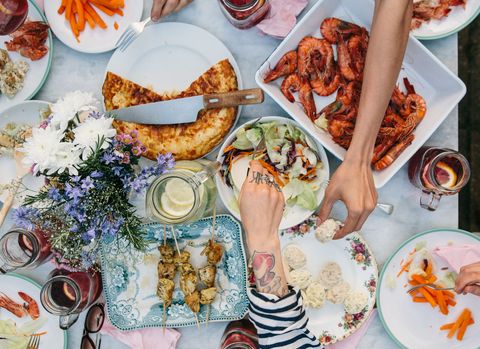 Last summer, my Scottish brother-in-law, Tommy, came to the States for a visit and, for two weeks, we ate his way: a lot of cow, too many drinks, nary a vegetable in sight. One night, feeling pickled and desperate for something green, I asked a server about the vegetarian option. Before she could answer, Tommy scoffed. "If you order that," he said, "my night is ruined."

I got the fish instead.

This kind of meal-time nagging may not appear in junior high textbooks with the same frequency as drug- and sex-related peer pressure, but it’s even more pervasive. It comes at you on a near-daily basis from friends, colleagues, even strangers. I’m looking at you, checkout lady at my small-town grocery store who makes grossed-out faces at my meatless meatballs. (No, I’m not a vegetarian. Yes, I really just enjoy them.)

When my brother-in-law comes to town, this is our diet.
Stocksy

It makes no difference what your reasons are for eating—or not eating—a certain way. Perhaps dairy gives you cramps during SoulCycle. Perhaps you simply don’t like the taste of cake. Or maybe you once encountered an octopus adorably tapping at you from the other side of an aquarium and, in that moment, swore off calamari forever. (Ahem, thinking of a friend.) Unsolicited remarks about food choices come regardless of diet rationale. And sometimes it feels easier to give in than hold your ground. If you’re anything like me, you’ve spent many social engagements eating things you don’t want while sipping drinks you don’t need and feeling guilt you can’t stomach.

What other people eat is, of course, of great significance. Uncertainty around the sustainability of global food production means food choices increasingly feel like a political act, and the political is increasingly personal. There are valid ethical, environmental and health reasons for the way we navigate a supermarket or menu. And, I’d argue, having these conversations with peers is necessary and enlightening. But something tells me it’s not activism that recently drove one friend to stick a cheese fry in the mouth of another after she’d politely turned it down.

If you’re anything like me, you’ve spent many social engagements eating things you don’t want while sipping drinks you don’t need and feeling guilt you can’t stomach.

I’m less interested in peer pressure that stems from the moralization of food choices than I am in the seemingly inexplicable kind. Take Sharayah Hoffman, 31, from Jersey City, New Jersey. Over the course of a year, from her highest weight of 375, she dropped 150 pounds through diet and exercise. Then, largely due to social pressure, she gained 40 back.

“Recently, on a trip to New York, I walked about 12 miles,” Hoffman says. “When it came time for dinner, I ordered a burger without a bun and salad instead of fries. But everyone insisted, ‘Oh, you should have those fries; you exercised today!’ When you’re ordering differently than those around you, you’re often singled out, or made to feel like you’re being too picky.”

Perhaps unsurprisingly, this type of goading is self-serving—a result of people taking the choices of others as an indictment of their own.

“Food bullies feel insecure and threatened,” says Traci Mann, Ph.D., director of the Health and Eating Laboratory at the University of Minnesota and woman who gets flak from friends for loving marshmallow Peeps. “If they see you doing something they perceive as healthy, they might think: Oh God, now I have to do something healthy, too, or I’m going to look bad or gluttonous. I can’t have this milkshake if she’s having an iced tea.”

No calamari for me—I mean my friend—after spotting an octopus at an aquarium.
Stocksy

As a result, a food bully niggles a friend into ordering her way to justify her own decisions. After all, a buttery muffin or rich dessert feels less indulgent if everyone is having one. Alternately, food bullies may browbeat those around them into restricting their choices in order to make their own eating plans feel more valid or less onerous.

“Oftentimes, it’s a case of having a mirror held up to us,” says Dr. Mann. “We’re forced to reflect on our own choices and we don’t always like what we see, so we get defensive.”

Still, none of this explains why otherwise self-assured adults give in to food bullying. What makes us cave? If I was able to walk away from seven minutes in heaven with Ryan Teeterman (not his real name) despite a room full of kids yelling “do it!” in the fifth grade, why can’t I handle this? Answer: a desire to be liked.

One study found the less certain a person is of a dining companion’s affection, the more likely she is to eat the same way as that companion...her own desires be damned.

“Social matching of food is a way to ensure interactions run smoothly and that the people around you will accept and like you. A way to ingratiate oneself,” says lead author Eric Robinson, Ph.D., behavioral scientist and senior lecturer at the University of Liverpool. “A most basic human need is the need to belong, so we behave in ways that allow us to achieve that. Food is no exception.”

Dr. Robinson tells me this rationale likely applies in my case—my brother-in-law’s approval is important to me, so, whenever we’re together, I do my best impression of a whiskey-swilling carnivore. That fact that Tommy already approves of me and still would even if I opted for tofu and water? Doesn’t matter. Seeking acceptance via food choices is part of my wiring.

This kind of internalized pressure helps explain why we turn down cookies if our friends aren’t eating them, even after these friends have left the room. And why the greatest predictor of alcohol abuse on a college campus isn’t how much students want to drink, but how much they perceive the drinking norm to be. (Interestingly, pressure to imbibe gets worse with age. One study found middle-aged adults often invent excuses—driving or taking antibiotics—for saying no, because the arm-twisting is too great otherwise.)

Eating an indulgent dessert feels less so when everybody else is having one too.
Stocksy

A meta-analysis conducted by Dr. Robinson determined that conforming to eating norms is a way of reinforcing identity: What we eat helps us project a desired image. Indeed, food items are so intimately tied to personas, they’ve become stand-ins for them. The “granola” set? Civilized hippies. A “meat and potatoes” guy? Simple and masculine.

Food stereotypes are everywhere and they’re not typically flattering. In the cult classic The Breakfast Club, Claire’s sushi lunch is meant to highlight what a princess she is, while Allison’s candy sandwich reinforces her role as basketcase, and Brian’s crustless PB&J underlines his nerd status. In The Sopranos, the mob boss’s office, located in the back of a pork market, likely wouldn’t have carried the same gravitas had it been attached to a cupcake shop. And in When Harry met Sally, the driving force behind so many false relationship starts is Sally’s ultra-specific food ordering, which Harry says makes her the “worst kind of woman—you’re high-maintenance.”

Food bullying leans into this stereotyping. And while men are susceptible to it, too—guys avoid ordering vegetarian for fear of ridicule—it’s women who have the hardest time coping, because we’re conditioned to be amenable.

The less certain a person is of a dining companion’s affection, the more likely she is to eat the same way as that companion.

“We were brought up to be nice, to be kind, and not to challenge other people,” says Karen Koenig, LCSW, a licensed psychotherapist based in Florida. “We’re the approval seekers, so we placate others with our food choices.”

Fortunately, there are strategies for changing these people-pleasing ways.

Claire Madigan, P.hD., health behavior researcher at the University of Oxford, recommends the broken-record technique, in which you get comfortable saying “No, thank you”—no more, no less—repeatedly. “If you couch your rejection with something like, say, ‘It looks delicious, but—’ the food pusher might be tempted to carry on.”

Another strategy is to run a cost-benefit analysis. Weigh how likely a person is to be disappointed by what you choose to eat or reject, versus how disappointed you will be with yourself if you don’t stick to your plan. (Spoiler: Friends and family get over what’s on your plate as soon as a meal is through; you’re the one who has to live with it.)

But rehearsing a script or running socio-gastronomic equations at the dinner table feels like a lot of work for what should, in theory, be a really easy formula: Eat what you want.

And let other people eat what they want, too. Imagine how great the world (or at least the restaurants of the world) would be if we could all agree to vilify food bullying with the same passionate gusto with which we’ve demonized, at various points, carbs, fat, and gluten.

Or, as Michele Payn, author of upcoming book Food Bullying tells me: “Food should be about celebration, not condemnation. What works for you might not work for someone else, and that’s okay.”

Of course, this is all easier said than done. This week, it’s my turn to visit family in Scotland. Last night we went to dinner at a steakhouse, naturally, where I ordered a chorizo appetizer AND a burger (see how much I love you, Tommy?). But, still feeling hungover from the night before, I couldn’t bring myself to order a drink. Tommy rolled his eyes and called me a party pooper (“party puper” in Scots-English), but I held my ground. At least for a few hours anyway. Then, I gave in and ordered a cocktail, followed by a few more. The truth is, I’ve got a ways to go when it comes to standing firm in my food choices.

But—say what you want—I’m not bending on those meatless meatballs. 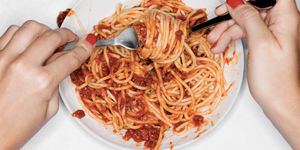