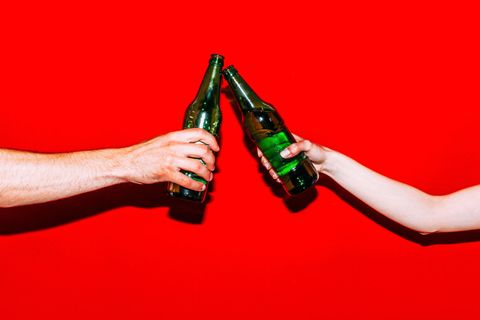 When most Americans hear "cider," they typically think of a fall drink made from apples, often served warm with a cinnamon stick. To the rest of the world? It means alcohol. (American cider is just juice, guys. Sorry.) But now real cider—or hard cider, as it's mostly marketed to us—is making a big splash in the U.S.

According to Stella Artois, the American cider market has doubled in the last three years and grown by nearly seven times in the past five years. Translation: It's the cool new "It" drink of summer 2016.

Cider makers have been experimenting with different flavors to get Americans on board with drinking it—and drinking it year-round. Think: pear, ginger, honey, and even cherry blossom.

"Cider has always been a huge player in Europe, and it's great to see it catch on here in the U.S.," says Harry Lewis, VP of Stella Artois. "The cider category has a few major players, but every day we see new product and brands hit the market that offer something exciting."

Lewis also credits the craft beer boom and the gluten-free market with cider's increasing popularity in the U.S.—because yes, cider is naturally gluten-free. Scared that it's too sweet? Don't be. "While most cider options are currently on the sweeter side, there are a number of drier options, such as Stella Artois Cidre," Lewis says.

Ready to give it a go? Here are some of our favorites: