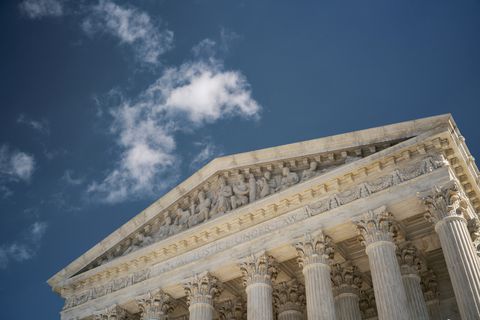 President Trump has said he will announce his nominee for Supreme Court justice on Monday, July 9. His pick, if confirmed, would replace Justice Anthony Kennedy, a key swing vote on the court who will be retiring. Court watchers are specifically checking out contenders' positions on abortion rights, and their stances could change reproductive rights in a massive way. The two frontrunners for the nomination are Brett Kavanaugh, a judge on the D.C. Circuit Court, and Amy Coney Barrett, a relatively new judge on the U.S. Court of Appeals for the Seventh Circuit, reports CBS News.

Kavanaugh is seen as having more support from the establishment, while Barrett appeals to Trump's grassroots base. Kavanaugh has said in the past he considered Roe v. Wade to be settled law, but Barrett's position isn't as clear.

How Barrett Has Stood on Faith and Abortion

Barrett has only been on the circuit court bench for less than a year, so experts mainly have her academic scholarship to pore over, rather than her judicial record. The judge, who is Catholic, has had a history of conservative stances on reproductive rights, as seen in her writing.

SCOTUSblog notes that her first law review article discussed the Catholic Church's lessons about the death penalty, writing that Catholic judges should sometimes recuse themselves in those cases. The article, which she cowrote with law professor John Garvey, called prohibitions on abortion and euthanasia "absolute" because they "take away innocent life."

The former Notre Dame law professor's Catholic faith was an issue during her confirmation hearings for the circuit court. Democrats, including Sen. Dianne Feinstein, grilled her about how her faith impacts her judging. “[When] you read your speeches, the conclusion one draws is that the dogma lives loudly within you," Feinstein told her. "And that’s of concern when you come to big issues that large numbers of people have fought for years in this country.”

Barrett, who once clerked for Justice Antonin Scalia, insisted that her personal opinions would have "no bearing" on her decisions as a judge. The debate didn't affect her confirmation, and Politico notes some conservatives say the testy exchange actually propelled her further up the list for Supreme Court consideration. Plus, Barrett is a woman, a mother of seven, in her mid-40s, and a person of faith, all aspects that may appeal to Trump on an optics level, CNN adds.

Barrett herself said during her confirmation hearing, "Roe has been affirmed many times and survived many challenges in the court. And it's more than 40 years old and it's clearly binding on all courts of appeals." Reuters notes that she has previously said she personally believes life begins at conception, but also has said she doubted Roe v. Wade would be overturned.

The newest justice could make a decision on abortion rights fairly quickly, Politico reports, because abortion cases are currently working their way through lower courts. And legal experts say these smaller cases could lead to a larger discussion about Roe v. Wade, and if that 1973 ruling were overturned, states could decide to make abortion illegal.

Sen. Susan Collins of Maine, a moderate Republican who is seen as a crucial vote, has said she wouldn't support a nominee who "would demonstrate hostility" to Roe v. Wade. She may have been referring to another potential nominee, federal appeals court judge William Pryor, who once called the Roe decision an "abomination," though his chances are slim.

Meanwhile, Senate Minority Leader Chuck Schumer has slammed both Barrett and Kavanaugh on Twitter over their abortion rights stances.

The bottom line: Judge Barrett has given every indication that she will be an activist judge on the Court. If chosen as the nominee, she will be the deciding vote to overturn Roe v. Wade and to strike down pre-existing conditions protections in the ACA. #WhatsAtStake

Brett Kavanaugh is a judge on the Court of Appeals for the DC Circuit & on @realDonaldTrump’s pre-approved list, having passed the “litmus test” on overturning Roe v. Wade & striking down protections for ppl w/ pre-ex conditions in the ACA. Here’s #WhatsAtStake if he’s confirmed:

It remains to be seen how either nomination would play out in the Senate.

Related Stories
Kennedy Has Screwed Over Women Like Never Before
A Politician Says Congress Isn't Funding Tampons
This content is created and maintained by a third party, and imported onto this page to help users provide their email addresses. You may be able to find more information about this and similar content at piano.io
Advertisement - Continue Reading Below
More From Politics
Want to Help Moms? Prioritize Menstrual Equity
Abortion Rights Start at the State Level
Advertisement - Continue Reading Below
All of Your Abortion Questions Answered
The Texas Abortion Snitch Site Is Having a Bad Day
The Future of Afghan Women Depends on Us
How You Can Help People in Afghanistan
Andrew Cuomo Has Resigned as NY Governor
Gwen Berry: Athlete, Activist, Olympian
The Anti-Choice Endgame: Power And Control
Give Domestic Workers the Protections They Deserve