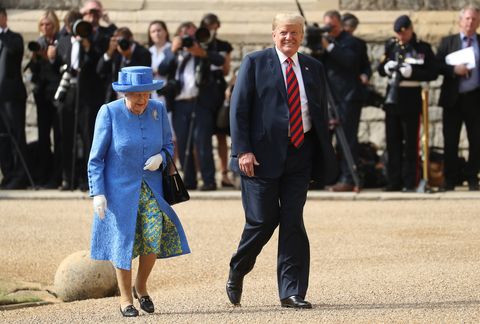 Remember when Queen Elizabeth II was left waiting for President Trump last month? Let me spark your memory: The 92-year-old matriarch was photographed checking her watch as she not-so-happily awaited for the Trumps to arrive at Windsor Castle. Welp, during a rally in Philadelphia last night, Trump claimed it was he who arrived early—and "fake news" is to blame for the false reports.

"I was about 15 minutes early and I'm waiting with my wife and that's fine. Hey, it's the Queen, right? We can wait. But I'm a little early,” he told the crowd. "And I didn't know this—it was supposed to last 15 minutes but it lasted like an hour because we got along. And she liked our first lady and our first lady liked her."

"But we got along fantastically well. But the time went by – you know, sometimes you get along and the time goes by," he said. Of reports that said the President was late and overstayed his welcome, Trump added, "They said I was late when I was actually early, number one. Number two, I guess the meeting was scheduled for 15 minutes and it lasted for almost an hour."

"And honestly folks, it was such a beautiful, beautiful visit an afternoon but they can make anything bad because they are the fake, fake disgusting news," the President concluded.

TBD if "fake news" also fabricated the fact that Trump turned his back on Her Majesty during the visit.

Related Story
Did the Queen Troll Trump With Her Brooch?
Ruby Buddemeyer Beauty Editor Ruby is the beauty editor at Cosmopolitan, where she covers beauty across print and digital.
This content is created and maintained by a third party, and imported onto this page to help users provide their email addresses. You may be able to find more information about this and similar content at piano.io
Advertisement - Continue Reading Below
More From Politics
Gwen Berry: Athlete, Activist, Olympian
The Anti-Choice Endgame: Power And Control
Advertisement - Continue Reading Below
Give Domestic Workers the Protections They Deserve
Kristin Urquiza Wants Justice for COVID-19 Victims
A Breakdown of VP Harris's Net Worth
WH Announces Removal of the Hyde Amendment
What Liberation Means This Juneteenth
Kathryn Garcia: It's Time to Step Up or Shut Up
A Valedictorian Speaks Out Against Abortion Bans
Standing Between Care and Violence